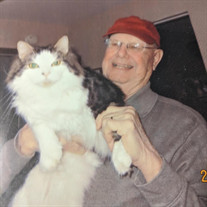 Harry Fallows Jr., age 88 of Millville, passed away peacefully Friday evening, April 3, 2020 at the Hammonton Center, Hammonton. Born and raised in Millville, he was a life long resident. At an early age Harry loved to cook, and his first job was working at a local restaurant. During that time, he also worked at Wheaton Glass Co., before joining the United States Air Force. For four years, he served as a Staff Sergeant during the Korean War. Once he returned, Harry continued working at Wheaton Glass Co. where he became the Shift Foreman, and retired after 38 years. He then worked for the Millville Board of Education at Holly Heights School as the cook, and retired after ten years. Harry was an avid golfer and enjoyed golfing with his two brothers. He also loved taking long drives with his wife Pauline. When it was time for family vacations, Harry enjoyed the long car rides and planned everything down to a T. As years went on, spending time with his grandchildren was one of his favorite pastimes. Harry will be sadly missed by his two daughters, Valerie Leek (Dave) of Deerfield Twp., and Brenda Guzman (Carlos) of Mays Landing; eight siblings, Jean Williams, Doris Harvey, Betty Brown, Dolores Johnson, Katherine Kell (Paul), Barbara Drzewski (Raymond), Sharron Siena (Bob), and Gary Fallows (Carol); four grandchildren, Zachary Blickos, Jeffrey Blickos (Beth), Melissa and Samantha Guzman; one great granddaughter Cadence Blickos; many nieces and nephews; and his loving cat Chi-Chi. He was predeceased by his wife Pauline (Farnetti) in 2017; and one brother Thomas Fallows. With the utmost care and concern for our families and friends during this pandemic, a memorial celebration for Harry Fallows Jr. will be announced and held in the near future at Christy Funeral Home, Millville. The family requests memorial contributions to South Jersey Regional Animal Shelter, 1244 N. Delsea Drive, Vineland, NJ 08360. Memories and expressions of sympathy for Harry Fallows Jr. may be shared on the Obituary Tribute Wall at www.christyfuneralservice.com.

Harry Fallows Jr., age 88 of Millville, passed away peacefully Friday evening, April 3, 2020 at the Hammonton Center, Hammonton. Born and raised in Millville, he was a life long resident. At an early age Harry loved to cook, and his... View Obituary & Service Information

The family of Harry Fallows Jr. created this Life Tributes page to make it easy to share your memories.