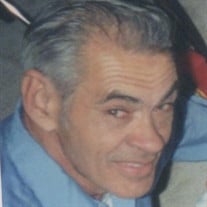 Harry Richard Daly, age 86 of Vineland passed away Thursday, September 6, 2018 at home with his family by his side. Born and raised in Cambria County, PA to the late Harry Edward and Jenny (Lambert) Daly, he graduated from Cochran High School. Harry worked at Bethlehem Steel in PA, prior to enlisting in the United States Army in 1953. He served during the Korean War, receiving the Good Conduct Medal and the National Defense Service Medal. He returned to Bethlehem Steel and worked there until it closed. In the early 1960's Harry and his family moved to Cumberland County, and eventually settled in Millville, before retiring to Vineland. For one year he worked at Armstrong Cork Co. For the next 36 years he worked for General Motors in Wilmington, DE, starting on the Assembly Line and retiring as a Foreman in 2000. Harry was a member of the Evangelical United Brethren Church in PA. He was an avid gardener and enjoyed working on cars. Harry will be sadly missed by his wife of 64 years, Shirley Ann (High); three daughters, Debra Hutchings of MD, Pamela Jean Daly of Mentor, OH, and Beatrice Hughes of Vineland; one son George Daly of Deerfield; two sisters, Lorna Hoffman, and Beverly; seven grandchildren; six great grandchildren; 11 nieces; ten nephews; and many cousins. He was predeceased by one son Dan Richard Daly; one daughter Bonnie Lee Smith; and five siblings, Kenneth Daly, Raymond Daly, Dorothy Dimshaw, Margaret Strayer, and Shelvy Meyers. A Memorial Service will begin at 11 a.m. on Friday, September 14, 2018 in the Christy Funeral Home, 11 W. Broad Street, Millville. Family and friends will be received on Friday from 9:30 a.m. to 11 a.m. in the funeral home. Burial will be private at the convenience of the family. In lieu of flowers, the family requests memorial contributions to the Heroes On The Water-South Jersey,... heroesonthewater.org. Memories and expressions of sympathy for Harry Richard Daly may be shared on the Obituary Tribute Wall at www.christyfuneralservice.com

Harry Richard Daly, age 86 of Vineland passed away Thursday, September 6, 2018 at home with his family by his side. Born and raised in Cambria County, PA to the late Harry Edward and Jenny (Lambert) Daly, he graduated from Cochran High... View Obituary & Service Information

The family of Harry Richard Daly created this Life Tributes page to make it easy to share your memories.

Send flowers to the Daly family.