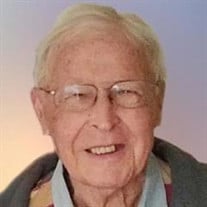 Harold J. "Stoney" Stullenburger, age 90 of Millville, passed away late Tuesday afternoon, March 29, 2016, at Inspira Medical Center, Vineland, after a brief illness. Stoney was born in Dillonvale, OH, as the son of a coal miner and a homemaker to the late Thurmond "Stoney" and Mary (Munson) Stullenburger. Stoney was raised in Neffs, OH, where he graduated from Bellaire High School in 1943. After high school, Stoney enlisted in the US Army and served during WW II in the 10th Armored Division, part of General Patton's Army and fought in France, Belgium, Luxembourg and Germany. Stoney bravely fought in heavy combat conditions, including the battles of the Rhineland, Ardennes and Battle of the Bulge, earning 3 Bronze stars and a Purple Heart. At the war's end Stoney served as part of US occupational troops in Garmisch Partenkirchen, southern Germany. In 2015 Stoney was also inducted into the French Legion of Honor "for risking his life to defend liberty" while fighting in France during WW II. After the war, Stoney attended Muskingham College, where he met his wife, Marjorie, and graduated in 1950 with a BS Degree in Business. Stoney was the first member in the Stullenburger family tree to ever attend and complete college. After graduating from college in 1951, he then went on to play baseball as a 3rd basemen for the major league Washington Senator's farm league team in Florida. Ending his baseball career in 1951, Stoney married Marjorie and began his business career, working for the Hazel Atlas Glass Company, the Continental Can Company and the Wheeling Stamping Company, all located in Wheeling, WV. In 1967, Stoney began a 23 year career at Wheaton Glass Company and moved his family to Millville the following year, after spending over a year commuting back and forth from West Virginia. He worked his way up in the company over the years and became the Vice President of Cosmetic Sales, and retired in 1990. Stoney was also a member of the Osiris Shriner's Masonic Lodge, Wheeling, WV and a member of the First Presbyterian Church on Maurice River, Millville, NJ. Stoney greatly enjoyed watching all sports, especially football, baseball and golf. He was an accomplished golfer. His favorite pastime was following and watching his beloved, Ohio State Buckeye's football and basketball teams. He was also a baseball trivia expert who could rarely be stumped. Stoney was also an avid reader of non-fiction history books. Stoney will be sadly missed by his loving wife Marjorie (Cook); one son Mark Stullenburger and wife Janice of Cape North, Nova Scotia; two daughters Melinda Muenker and husband Steve of Phoenix, AZ and Marci Stullenburger of San Diego, CA; one brother Richard Stullenburger and wife Louise of Merritt Island, FL; one sister-in-law Shirley Reynolds of Cary, NC; and two granddaughters, Lindsay and Amy Stullenburger. Stoney was predeceased by one sister Maxine McFarland and one brother James Stullenburger. A memorial service with military honors will be announced at a later date at the convenience of the family. Arrangements are under the direction of Christy Funeral Home, Millville. In lieu of flowers, the family requests memorial contributions be made to Honor Flight Philadelphia, P.O. Box 003, Broomall, PA, 19008. The Honor Flight Network is a charity that transports veterans to Washington, D.C. to visit their memorials. Memories and expressions of sympathy for Harold Stullenburger may be shared on the Obituary Tribute wall at: www.christyfuneralservice.com.

Harold J. "Stoney" Stullenburger, age 90 of Millville, passed away late Tuesday afternoon, March 29, 2016, at Inspira Medical Center, Vineland, after a brief illness. Stoney was born in Dillonvale, OH, as the son of a coal miner and a homemaker... View Obituary & Service Information

The family of Harold J. Stullenburger created this Life Tributes page to make it easy to share your memories.

Send flowers to the Stullenburger family.