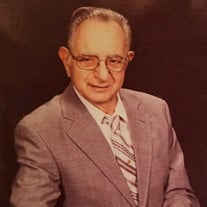 Girard "Pat" Pasquale Canino, age 76 of Millville, passed away peacefully at home, surrounded by his loving family on Saturday, December 21, 2019. Pat had suffered with Parkinson's disease for several years. Born and raised in Vineland to the late Girard and Marie (Leonardo) Canino, Pat graduated from Vineland High School, Class of 1961, and then served a four year apprenticeship for mold making. He then went on to work as a mold maker at Wheaton Glass Co. in Millville for over 38 years, retiring in 2003. Pat was a longtime member of the Parish of All Saints in Millville (St. John Bosco) where he enjoyed working Bingo and serving as an usher. He was also a lifetime member of the Knights of Columbus Council No. 1778 of Millville, serving for three years as Grand Knight. Pat owned a variety of motorcycles over the years. He started riding at age 18 and rode until 2012. He loved traveling, especially across all 48 continental United States with his wife, Gail, on his Honda Goldwing. They also visited Alaska, Hawaii, and took several wonderful trips to Europe, Canada (Vancouver), and Mexico (Cancun). Working on cars, weightlifting, and spending time out in the garage working on various projects were some of Pat's favorite pastimes. Pat will be sadly missed by his loving wife of over 33 years, Gail (Shourds) Canino of Millville; one son Brian Canino (Jackie) of Vineland; one daughter Joyce Canino; one Step-son David Fiamingo (Isabel) of St. Cloud, FL; two sisters, Cornelia Suthard (Tom) of Stow Creek and Marie Martinez (Albert) of CA; seven grandchildren, Joseph, Brittany, Meghan, Pam, Candis, Christina, and Zachary; five great-grandchildren, Scott, MyMy, Jaxson, Cheyenne, and Cayden; and many nieces, nephews, and cousins. He was predeceased by his sister Dolores "Cookie" Canino. A Mass of Christian Burial will be conducted on Monday, December 30, 2019 at 11 a.m. in the Parish of All Saints, Buck and Depot Streets, Millville. Family and friends will be received on Monday from 9:30 to 10:30 a.m. in the Christy Funeral Home 11 W. Broad Street, Millville. Burial will be in Sacred Heart Cemetery, Vineland. In lieu of flowers, memorial contributions in Pat's memory may be made to The Parkinson's Foundation at parkinson.org or the Michael J. Fox Foundation at michaeljfox.org, or a charity of one's choice. Memories and expressions of sympathy for Girard "Pat" Pasquale Canino may be shared on the Obituary Tribute Wall at www.christyfuneralservice.com.

The family of Girard "Pat" Pasquale Canino created this Life Tributes page to make it easy to share your memories.

Send flowers to the Canino family.