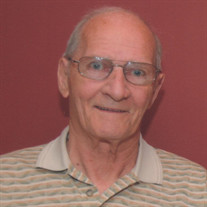 Gilbert J. Hinson Sr., age 81 of Fairton and formerly of Millville, passed away Tuesday morning, July 10, 2018 at his son Gilbert's house with his family and friends by his side. Born and raised in Millville to the late Joseph and Helen (Adams) Hinson, he lived in Millville most of his life before moving to Fairton 15 years ago. Gilbert served in the Unites States Navy during the Korean Conflict. He then started working for Wheaton Glass Co. as an I.S. Machine Builder. He then worked for Maul Bros. for 20 years until it closed, and returned to Wheaton Industries and retired. He also owned and operated Hinson's Bike Shop in Millville. He was a member of Fairton Christian Center, and a life member of the B.P. O. Elks of Millville. Gilbert enjoyed racing hydroplane boats, and restoring antique cars. He took great pride in his 1966 Ford Mustang. Gilbert will be sadly missed by his sons, Gilbert Hinson Jr., and wife Michelle (Wright) of Fairton, and Joseph Hinson of Millville; three grandchildren, Gilbert Hinson III and fiancée Nichole Hesington of Fairton, Danielle Hinson and fiancé Billy Taylor of Millville, and Paige Hinson of Mays Landing; two great grandchildren, Gary Smiley and Grace Mae Taylor of Millville; brother Paul Hinson and Marion (Formica) of Millville; nieces, Christine Klinck (Sheil) and Ronan of Haddon Twp., and Gerri (Klinck) Brosh of Vineland; nephews, Leon Klinck of Millville, and Bill Klinck III and Pat (Duffield) of Millville; friends, Jim Hanson of Millville, and Donald Christian of Upper Deerfield; and his faithful companion who never left his side, Daisy. He was predeceased by his wife of 44 years in 2003, Mabel (Klinck) Hinson. Funeral services will be conducted at 11 a.m. on Friday, July 13, 2018 in the Christy Funeral Home, 11 W. Broad Street, Millville. Family and friends will be received on Thursday from 6 to 8 p.m. and Friday from 10 to 11 a.m. in the funeral home. Burial will be in Mt. Pleasant Cemetery, Millville. In memory of Gilbert Hinson Sr. the family requests memorial donations to Millville Genesis Center Recreation Dept., 54 Sharp Street, Millville, NJ 08332. Memories and expressions of sympathy for Gilbert Hinson Sr. may be shared on the Obituary Tribute Wall at www.christyfuneralservice.com. Gilbert's family would like to extend a very special 'thank you' to Bayada Hospice for all of your care and support, especially to Amber, Andrea, Kim and Teena.

Gilbert J. Hinson Sr., age 81 of Fairton and formerly of Millville, passed away Tuesday morning, July 10, 2018 at his son Gilbert's house with his family and friends by his side. Born and raised in Millville to the late Joseph and Helen... View Obituary & Service Information

The family of Gilbert J. Hinson Sr. created this Life Tributes page to make it easy to share your memories.