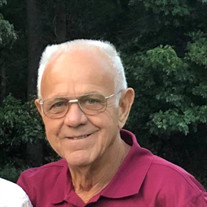 George Carty Sr., of Millville, passed away Saturday afternoon, July 25, 2020, three days after his 80th birthday.  He was at home, surrounded by his loving family and closest friends.   Born in 1940, in Millville to the late John Benjamin and Marguerite (Mullen) Carty, he graduated from Millville High School, in 1959, and was a lifelong resident.   As a young man, George worked for ten years for ACME Markets. He then began his career at Atlantic City Electric. In 1995, after 27 and ½ years, he retired as a Field Supervisor.  During his retirement George worked for Cumberland County College as well as Easter Seals. He was an electrician and handyman who would drop everything to assist anyone who needed his help. George was Past Master of Shekinah Lodge No. 58 F & AM, Past Exalted Ruler of the Millville Elks Lodge No. 580, and a member of Sons of the American Legion, Nabb-Leslie Post No. 82 of Millville.  He spent much of his life doing what he loved, being in service to the Millville community. He was a volunteer and coordinator of countless activities through the Millville Elks Lodge. George had a smile for everyone. He enjoyed golfing, bike riding, watching his hummingbirds, boating and clamming, but he was happiest sharing the beach in Strathmere with his family. His loss will be felt by many, but most of all by his wife Ceolia (Lore), they would have celebrated their 61st wedding anniversary in August. He will be deeply missed by his son Michael and wife Pamela of Millville; his grandchildren, George Carty and Danielle Carty; brother Horton Carty and wife Irene of Milmay; sisters, Marguerite Potter of Cologne; Verna Reynolds of Linwood, and Judy Terrigno of VA.  He was predeceased by his son George Carty Jr.; brother John Carty; and sister Lavina Wooley. A celebration of George's life will be scheduled at a later date, at the convenience of the family. Arrangements are under the direction of Christy Funeral Home, Millville. George was a strong supporter of those in the trade industries, in support of him, Memorial contributions may be made to: The Millville Elks Lodge, c/o The George Carty Technical Scholarship Fund, 1815 E. Broad Street, Millville, NJ 08332.  Memories and expressions of sympathy for George Carty Sr. may be shared on the Obituary Tribute Wall at www.christyfuneralservice.com

George Carty Sr., of Millville, passed away Saturday afternoon, July 25, 2020, three days after his 80th birthday.  He was at home, surrounded by his loving family and closest friends.   Born in 1940, in Millville to the late John Benjamin... View Obituary & Service Information

The family of George Carty Sr. created this Life Tributes page to make it easy to share your memories.