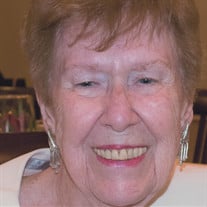 Genevieve C. Waltman, 90, of Millville passed peacefully in her home on Saturday morning, January 14, 2017. Born in Norfolk, Virginia, Mrs. Waltman attended Woodrow Wilson High School in Portsmouth, Virginia and graduated as salutatorian of her class in 1943. She continued her studies at the Norfolk Division of the College of William and Mary and the School of Medical Technology, De Paul Hospital in Norfolk. A lifelong learner, Mrs. Waltman furthered her studies over her lifetime at the Cumberland County College, Glassboro State College, and L’Université Catholique de l’Ouest in Angers, France, pursuing her love of the French language. She served as a draftsman during World War II in the Norfolk Navy Yard. With an aspiration to enter the medical field, she then went on to become a histologist at the De Paul Hospital in Norfolk. She also worked as a medical technologist, ASCP certified, at the Manhattan Eye, Ear, and Throat Hospital in New York City. Mrs. Waltman, known as Jo to her friends due to her love of Louisa May Alcott’s fictional character, Jo March, in Little Women, took up residence in Millville in 1949 after meeting her husband, lifelong resident of Millville, Albert R. Waltman, at William and Mary. As a resident of Millville, she heavily involved herself in the community. Notable roles included: President, Millville Junior Woman’s Club; President, Millville Woman’s Club; most recently she earned the distinction of "Honorary Member" of the Millville Woman's Club; and Chairman, Cumberland County Cultural and Heritage Commission. For the New Jersey State Federation of Women’s Clubs, her many responsibilities included: Southern Vice Chairman of the Literature Department, Southern Vice Chairman of the Education Department, District Chairman of Literature, District Chairman of Civics and Legislation, State Chairman of National Library Week, and conducting literature workshops at the State Federation’s conventions. Mrs. Waltman also served on the Boards of the Cumberland County Community Concerts Association, the Y’s Menettes, the Millville Hospital Auxiliary, and the Curriculum Committee of the Cumberland County College. An appreciator and promoter of the arts, Mrs. Waltman was a student of languages and the written word. She promoted her appreciation of poetry through programs of poetry readings and writing days. She was awarded second, third, and honorable mention prizes in New Jersey State Federation of Women’s Clubs’ poetry contests. For many years, she also enjoyed subscriptions at the New York City Ballet, the Metropolitan Opera, and the New York City Opera. Further interests included reading, tennis, bridge, museums, theater, and the education of her grandchildren. Mrs. Waltman was predeceased by her husband, Albert R. Waltman; and brothers, Kenneth Blake, Benjamin Blake, and Patrick Blake. Survivors include her two daughters, Susan C. Waltman and her husband Thomas Barry of Pelham, New York, and Deborah Amanda Wodlinger and her husband Gary Wodlinger of Millville; a sister, Ramona Fanning of Jacksonville, Florida; and three grandchildren, Michael Barry, Rosalyn Polson, and Allen Wodlinger. Services will be held at the Christy Funeral Home, 11 W. Broad Street, Millville on Thursday, January 19, 2017 at 11:30 a.m. Visitation will take place immediately before the service at Christy Funeral Home from 10:00 a.m. to 11:30 a.m. Burial will be in Mt. Pleasant Cemetery, Millville. In lieu of flowers, donations can be made to the Barn Studio of Art: P.O. Box 29, 814 Whitaker Avenue, Millville, NJ 08332 or www.barnstudio.org. Memories and expressions of sympathy for Genevieve Waltman may be shared on the Obituary Tribute Wall at www.christyfuneralservice.com.

The family of Genevieve C. Waltman created this Life Tributes page to make it easy to share your memories.

Genevieve C. Waltman, 90, of Millville passed peacefully in her...

Send flowers to the Waltman family.