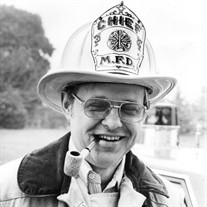 Gary L Wallen, age 82 of Millville, passed away on Wednesday, October 21, 2020 with his family by his side after a long battle with COPD. Gary was born in Philadelphia, PA to the late Maxfield and Sylvia (Shaw) Wallen on July 10, 1938. Gary was a lifelong resident of Millville, NJ graduating Millville Memorial High School in 1956. He went on to attend the Radio Electronic Institute in Philadelphia, received a Vocational Education Certification from Glassboro State College, and became one of the first Licensed Code Officials in Electricity and Fire Protection in the State of NJ. He had a long career in industry serving as a Technician at Remington Rand UNIVAC in Philadelphia, an Electrician/Engineer at Wheaton Industries, an Engineer at JOMAR Industries, and running his own company, MBW Electric Controls, in which he designed and built control panels. From 1976 to 1986, Gary worked for the Millville Board of Education as a Vocational Teacher of Electricity, continuing his employment with the Board of Ed as the Stage Manager for the High School until 2007. From 1985 through October 2019, Gary served as Electric and/or Fire Inspector for various municipalities including Millville, Upper Deerfield, Fairfield, Commercial, Deerfield, Oldmans Creek, Bridgeton, Pittsgrove and Hopewell. Gary had many interests and hobbies over the years. As a teen Boy Scout he traveled via rail to the Scout Jamboree in California and to the Philmont Scout Ranch. Later, he served as a leader at the Colorado Scout Jamboree, and at Camp Kimble in Auburn, NJ, and finally as an assistant leader for Troop 5 in Millville. He joined the Millville Fire Department in 1962 in his early 20’s, rising through the ranks of officers, to be elected as Fire Chief, serving twice from 1982 to 1985, and again from 1988 to 1994. During his time as a firefighter, he was also a County Fire School Instructor and the superintendent of the city’s fire alarm system prior to the institution of the 911 system. He consulted on the city-wide water system maps, and served on the Municipal Planning Board. As the Stage Manager at MSHS, Gary “MacGyvered” many a set, sound board and light bar. And had his very own “Mr. Wallen Fan Club.” An avid train buff, he traveled across the US, and across England and Western Europe via train, and had an extensive model train collection. He was also a connoisseur of fine bourbon and good craft beer. He knew the South Jersey area like the back of his hand, and was a repository of local knowledge and hard to find, “useless” junk. Gary was a regular at many local diners and restaurants, and was a part of official and unofficial breakfast clubs throughout Cumberland County. He is survived by his wife Julia (Holding) Wallen; son Michael Wallen of Millville; daughter Amy Giuliani of Vineland; and “son” David Smith (Sue) of Millville; granddaughters Catherine and Michaela Giuliani of Vineland, Annabelle Wallen of Woodstown, and “granddaughter” Michele Smith of Epping, New Hampshire, and several cousins, in-laws, and nieces/nephews. Gary was predeceased by his two brothers, Terry Lee Wallen, and Richard F. Wallen; his son-in-law Gregory Giuliani; and his “grandson” Marshall Smith. A special funeral service for Gary will be conducted on Saturday, October 31, 2020 at 11:00 a.m. in the Millville Fire Department, 420 Buck Street, Millville. Family and friends will be received on Friday evening, October 30, 2020 from 5 to 7:30 p.m. in the Christy Funeral Home, 11 W. Broad Street, Millville, and again on Saturday morning from 10 to 11 a.m. at the Millville Fire Department. Burial will follow in Mt. Pleasant Cemetery. Parking on Saturday is available in two places less than one block from the fire department, at the funeral home, and also across from the Maurice View Plaza (old YMCA bldg.) at Vine and Buck streets. Please remember to practice social distancing while in the funeral home, fire department, and the cemetery. Also, masks are required to be worn in the funeral home and fire department at all times. In lieu of flowers, donations in loving memory of Gary may be made to the Millville Fire Department, 420 Buck St., Millville, NJ 08332; the Marshall R. Smith Childhood Cancer Foundation, PO Box 304, Millville, NJ 08332; and/or Angelic Health, 8025 Black Horse Pike, Suite 501, West Atlantic City, NJ 08232. Memories and expressions of sympathy for Gary L. Wallen may be shared on the Obituary Tribute Wall at: www.christyfuneralservice.com.

Gary L Wallen, age 82 of Millville, passed away on Wednesday, October 21, 2020 with his family by his side after a long battle with COPD. Gary was born in Philadelphia, PA to the late Maxfield and Sylvia (Shaw) Wallen on July 10, 1938.... View Obituary & Service Information

The family of Gary L. Wallen created this Life Tributes page to make it easy to share your memories.

Gary L Wallen, age 82 of Millville, passed away on Wednesday,...

Send flowers to the Wallen family.