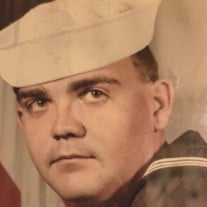 Frank Maxwell Hayes, age 73 of Millville, passed away Saturday evening, October 19, 2019 at Inspira Medical Center, Vineland after a lengthy illness. Born in Millville to the late Francis Maxwell and Elizabeth (Madden) Hayes, Frank graduated from Millville High School, Class of 1965. He then attended Cumberland County College and received his Associates Degree. In 1967 Frank joined the United States Navy and 20 years later he retired. He began serving in the Seabees Unit before being deployed to Vietnam in May of 1968. Eventually Frank was promoted to Storekeeper First Class. Throughout his Naval Career, Frank was deployed to Spain, Guam, Bermuda, Scotland, Japan, and many more countries around the world. From the beginning to the end of his Navy days, Frank received numerous medals, including three bronze stars. On February 15, 1980, Frank received The Navy Achievement Medal which is the U.S. Navy's highest peacetime medal. When he retired from the Navy in 1987, Frank went back to school to receive his Bachelor's Degree in Criminal Justice. Beginning at a young age, archery was one of his favorite pastimes. However, over the years, he truly enjoyed talking to his Navy buddies. He was very knowledgeable in American History, and he took great pride in serving his country. Frank was a member of the American Legion Nabb-Leslie Post No. 82 of Millville, and the Millville Elks Lodge No. 580. Frank will be sadly missed by his sister Edith Prokson of Port Elizabeth; two nephews, Michael Prokson and wife Tammy, and Steve Tarallo; and his longtime, special friend Kathy. Funeral services will be conducted at 11 a.m. on Monday, October 28, 2019 in the Christy Funeral Home, 11 W. Broad Street, Millville. Family and friends will be received on Monday from 10 to 11 a.m. in the funeral home. Burial with Military Honors will be in Mt. Pleasant Cemetery, Millville. In memory of Frank, the family requests contributions to The Children's Hospital of Philadelphia Foundation, P.O. Box 781352, Philadelphia, PA 19178-1352. Memories and expressions of sympathy for Frank Hayes may be shared on the Obituary Tribute Wall at www.christyfuneralservice.com.

The family of Frank Maxwell Hayes created this Life Tributes page to make it easy to share your memories.

Send flowers to the Hayes family.