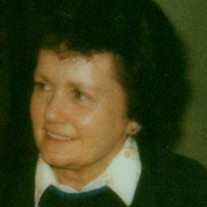 “There’s no problem too big and no question too small. Just ask God in Faith and he’ll answer them all.” Loving mother, grandmother, and kindest friend left us from the comfort of her home in the presence of family on the evening of January 15, 2016 at the age of 91. Frances was born on March 21, 1924 and was the eldest of 8 children. She grew up in a small bungalow in South Vineland and lived most of her life in Millville. She made many friends as a buyer for Wheaton Scientific over her 30-year career, reluctantly retiring at the age of 75. Frances was a perfectionist who was passionate about life. She was beautiful, strong, and determined. She wholeheartedly provided for and protected those who she loved. A fierce advocate for cancer research, Frances had a very generous soul and donated to many charities throughout her lifetime. She also rallied for natural and holistic treatments and remedies. She loved to read and had a gifted green thumb. For many years, friends and family would be most likely to catch her in her flower garden or nose-in-book. In addition to drawing, painting, and needlepointing, she was also an avid computer user. She was famously fond of the work by Charles M. Schulz, and will be remembered for collecting her favorite characters Snoopy and Woodstock. She will also be remembered for calling her loved ones by her favorite term of endearment, “honeybunch,” and for her infamous but never quite duplicated yum-yum cake. She is predeceased by her daughter Karen Forster (nee Robbins), her son Lewis Robbins Jr., her grandchildren Terry Dolphin (nee Peacock) and Lewis Robbins the 3rd, three sisters Alice Henry (nee Stites), Rosalie and Shirley Stites, and by two brothers Harry and George Stites. Additionally, she is predeceased by her aunt Clara Oliver (nee Whilden), her mother Emma Stites (nee Whilden), and father Harry Stites. She is survived by her daughter Maxine Bruggis (nee Robbins), her sister Judy Schwegel, her grandchildren Alex Forster and Suzanne Robitaille, Great Granddaughter Kalli Robitaille, Son in-law Greg Forster, and Daughter in-law Susan Robbins. She is also survived by her brother Jack Stites and his wife Silvia, Sisters in-law Ann and Betty Stites, and many nieces and nephews. A Memorial Service will be held at 11 a.m. on Thursday, January 21, 2016 in the Christy Funeral Home, 11 W. Broad St., Millville. Family and friends will be received on Thursday from 9 to 11 a.m. in the funeral home. Burial will follow in Greenwood Memorial Park in Millville. Memories and expressions of sympathy for Frances Robbins may be shared on the Obituary Tribute Wall at www.christyfuneralservice.com.

&#8220;There&#8217;s no problem too big and no question too small. Just ask God in Faith and he&#8217;ll answer them all.&#8221; Loving mother, grandmother, and kindest friend left us from the comfort of her home in the presence of family... View Obituary & Service Information

The family of Frances S. Robbins created this Life Tributes page to make it easy to share your memories.

“There’s no problem too big and no question too small. Just ask...