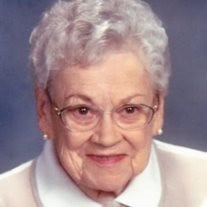 Eunice M. Kenney, age 93, of Centennial, CO, died April 5, 2014 at Someren Glen Christian Living Community (formerly The Johnson Center) in Centennial, CO, where she had lived for the past 8 ½ years. Eunice was born April 8, 1920, in Millville, to the late Leon and Lottie (Hignett) Hogan. She married Chester Patrick Kenney in October 1946. They were married for 54 years until his death in 2000. Mrs. Kenney was a resident of Millville for 64 years until retiring with Chester to Punta Gorda, FL, in 1984. In 2004, she relocated to Colorado to be near family. Mrs. Kenney graduated from Millville High School in 1938. She was an active and devoted member of Second United Methodist Church in Millville, and later of First United Methodist Church of Punta Gorda, FL. She was a member of the Women’s Society of Christian Service in Millville. She was educated in the art of elocution, and was well known in the area as a talented speaker. She was often invited to make presentations at church and civic events throughout the Cumberland County area. She loved to travel with her husband and appreciated the beauty of nature wherever she ventured. Mrs. Kenney is survived by two daughters, Betty Ann Crowley and her husband James of Huntington Beach, CA; Sharon Kenney of Littleton, CO; grandsons Bruce Dodds, Lakeside, CA, and Brian Dodds, Anacortes, WA; several grandchildren and great-grandchildren, and many beloved nieces and nephews. She was preceded in death by her husband, Chester, three brothers, Leon Hogan, Jr., Kenneth Hogan, and Merrill Hogan, and by her son-in-law Dennis Willett. Friends and relatives are invited to attend the viewing from 10 a.m. to 11 a.m. on Friday, April 11, 2014 at Christy Funeral Home, 11 W. Broad St., Millville. The funeral service will begin at 11 a.m. on Friday in the funeral home. Burial will take place at Greenwood Memorial Park following the service. In lieu of flowers, memorials may be made in Eunice’s memory to Second United Methodist Church, 911 Church St., Millville, NJ 08332, or Christian Living Communities – Someren Glen, 5000 E. Arapahoe Rd., Centennial, CO 80122. Memories and expressions of sympathy for Eunice Kenney may be shared on the Obituary Tribute Wall at: www.christyfuneralservice.com.

The family of Eunice Kenney created this Life Tributes page to make it easy to share your memories.

Send flowers to the Kenney family.