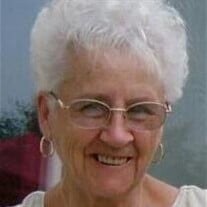 Ethel S. (Steelman) Biener, age 81 of Millville, passed away Thursday, August 6, 2015 at Cooper Hospital in Camden after a lengthy illness. Born and raised in Tuckerton, Mrs. Biener lived in Millville for over 60 years. She retired from Wheaton Ware in Millville, where she had worked as a Packer for 43 years. Mrs. Biener was very involved with the Special Olympics, ARC, and Girl Scouts for the handicap. She enjoyed shopping, traveling and spending time with her family. Mrs. Biener is survived by one son Joseph Biener and wife Teresa of Franklinville; four daughters, Susan Biener of Bridgeton, Robin Biener of Millville, Betty Polhamus of Millville, and Nancy Fox; three sisters, Mary Jenkins, Laura Robinson and Lillian Ferus, all of Millville; six grandchildren, Brandi Jacquet and her fiance Jarrod Chain, Sherry Gromes and husband Travis, Joseph Biener, Joshua Biener, Chelsea Biener, and Tressa Biener; and five great grandchildren, Jacob, Austin, Riley, Evan and Aiden. She was predeceased by her husband Joseph G. Biener in 2002; her parents, Charles and Addie (Stites) Steelman; two sisters, Delsey and Emily; three brothers, Ralph, Jobi and Hank; and one son in law Tom Bonavich Jr. Funeral services will be conducted at 11 a.m. on Thursday, August 13, 2015 in the Christy Funeral Home, 11 W. Broad Street, Millville. There will be a viewing on Thursday from 9 to 11 a.m. in the funeral home. A private burial will be at the convenience of the family at a later date. Memories and expressions of sympathy for Ethel Biener may be shared on the Obituary Tribute Wall at www.christyfuneralservice.com.

Ethel S. (Steelman) Biener, age 81 of Millville, passed away Thursday, August 6, 2015 at Cooper Hospital in Camden after a lengthy illness. Born and raised in Tuckerton, Mrs. Biener lived in Millville for over 60 years. She retired from... View Obituary & Service Information

The family of Ethel S. Biener created this Life Tributes page to make it easy to share your memories.

Send flowers to the Biener family.