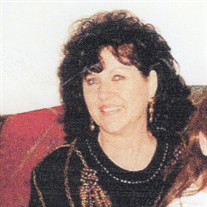 Elizabeth "Bettie" (Cottrell) Cossaboon, age 84 of Millville, passed away peacefully on February 14, 2022 at Inspira Medical Center, Vineland with her loving children by her side. Bettie was born in Millville on March 20, 1937 to the late Willard (Putt) Cottrell and Margaret (Beakley) Cottrell. She was a lifelong resident of Millville, and a graduate of Millville High School, Class of 1957. Bettie devoted herself to children - not only her own but many other "adopted" children, as well. One of the many examples of her devotion to children was that she once bought stones off of the neighborhood kids, so that they could have money to buy candy. Bettie is survived by her children, daughter Lisa Basile and husband Jeff; her son Craig Cossaboon; her granddaughter Rhiannon Basile Kerwin (Dan); and her grandson Craig Cossaboon Jr. She is also survived by her brother Mulford Cottrell (Jackie); her brothers-in-law, Stan Cook and Pete Randazzo; her sisters-in-law Shirley Davis and Charlotte Cottrell; a family friend Larry Schenck; as well as many nieces, nephews, and her "adopted" children. Bettie was predeceased by her husband Roland Wayne Cossaboon in 2015. One of nine children, Bettie is predeceased by her brothers, Willard, Richard "Pete," Marvin, and Fred; and sisters, Deborah, Kendall, Mabel Cook and Helen Randazzo. The family wishes to extend their sincere thanks and gratitude to Dr. Sarath Babu and staff, as well as the doctors, nurses and staff of the Emergency Room and Third-floor ICU Step-down at Inspira Medical Center, Vineland for their kindness, compassion and care of our mother. Funeral services will be conducted at 11 a.m. on Monday, February 21, 2022 in the Christy Funeral Home, 11 W. Broad Street, Millville. Family and friends will be received on Monday from 10 a.m. to 11 a.m. in the funeral home. Burial will be in Mt. Pleasant Cemetery, Millville. In memory of Elizabeth, her family requests memorial contributions to St. Jude Children's Research Hospital, 501 St. Jude Place, Memphis, TN 38105 or to South Jersey Regional Animal Shelter, 1244 N. Delsea Drive, Vineland, NJ 08360. Memories and expressions of sympathy for Elizabeth Cossaboon may be shared on the Obituary Tribute Wall at www.christyfuneralservice.com.

Elizabeth "Bettie" (Cottrell) Cossaboon, age 84 of Millville, passed away peacefully on February 14, 2022 at Inspira Medical Center, Vineland with her loving children by her side. Bettie was born in Millville on March 20, 1937 to the late... View Obituary & Service Information

The family of Elizabeth C. Cossaboon created this Life Tributes page to make it easy to share your memories.

Send flowers to the Cossaboon family.