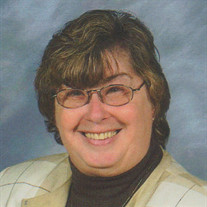 Eleanor Nancy (Boyd) Servais, age 74 of Carneys Point, passed away peacefully Monday, July 24, 2017 at Friends Village of Woodstown. She had been in declining health. Born in Elsmere, Delaware to the late Edward and Margaret (Davis) Boyd, Eleanor was raised in Carneys Point, and graduated from Penns Grove High School, Class of 1959. Eleanor married and moved to Millville, where she and her husband Frank raised their family. They shared over 34 years of marriage together. She worked at Wheaton Glass Company in Millville, and then became a Nurse's Aide at the Bishop McCarthy Residence in Vineland. Eleanor was a member of the First Baptist Church of Pedricktown, NJ. She was an avid General Hospital and Action News fan, and always enjoyed watching Dancing with the Stars with her twin sister, Mildred. Eleanor's family would like to issue a special thanks to: Penn Medicine staff and Dr. Jignesh Bhavsar; Seretis Care Family Practice and Dr. George Seretis; and the staff at Friends Village of Woodstown, for the care and love shown to Eleanor over the last seven years of her declining health. Eleanor will be sadly missed by her two sons, Frank J. Servais and wife Janice of Bridgeport, NJ and Brian Servais of Downingtown, PA; four grandchildren, Ashley, F. Justin, Frank V, and Timothy; two sisters, Carol Pagnatto and Marge Winfield, both of Pennsville; niece Betty Jane Magee, who the family would like to say a special thanks to for the help and love that she provided to her aunt over the years; and several other nieces and nephews. She was predeceased in 1995 by her husband Frank Servais, Sr.; two sons, David and Carl Servais; grandson David Servais; and two sisters, Bette Boyd and Mildred Magee (her twin). A Graveside Service will be conducted at 11 a.m. on Saturday, August 5, 2017 in Greenwood Memorial Park, Tenth and Broad Streets in Millville. Arrangements are under the direction of the Christy Funeral Home, Millville. Memories and Expressions of sympathy for Eleanor Servais may be shared on the Obituary Tribute Wall at: www.christyfuneralservice.com.

Eleanor Nancy (Boyd) Servais, age 74 of Carneys Point, passed away peacefully Monday, July 24, 2017 at Friends Village of Woodstown. She had been in declining health. Born in Elsmere, Delaware to the late Edward and Margaret (Davis) Boyd,... View Obituary & Service Information

The family of Eleanor Nancy Servais created this Life Tributes page to make it easy to share your memories.

Send flowers to the Servais family.