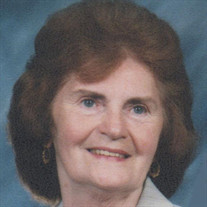 Eleanor (Fore) McDermott, age 82, peacefully left this world on Wednesday, December 10, 2014, after a lengthy battle with Alzheimer's disease. The only daughter of the late Francis Patrick Fore and Sara Flanagan of Philadelphia, PA., she was born and raised in South Philadelphia. Eleanor graduated from Hallahan Catholic School for Girls in 1950. She married William Joseph McDermott, her sweetheart from the neighborhood, at Saint Monica's Roman Catholic Church, Philadelphia, PA on May 26, 1951. They moved to Vineland, NJ in 1957 and then to Millville in 1966. Eleanor worked for the Duralith Corporation in Millville, for 27 years. She was predeceased by her husband and life partner, Billy in 2006. She loved spending time in Atlantic City and attending shows at The Music Pier in Ocean City. She enjoyed dancing and was a member of the Dancing Granny's for several years. Eleanor was a lifetime fan of the Mummers Parade and spent many New Years Days on Broad Street in South Philly. She was born into a musical family and enjoyed playing the banjo. Eleanor was also a member of a bowling team at Loyle Lanes for many years. She will always be remembered for her kind, humble spirit and her willingness to help others in any way she could. A devoted mother, Eleanor leaves behind to honor her memory, her five children, Kathy Robinson and husband Jack of Vineland, Maureen Scarpa and husband Bruce of Vineland, Sheila Mitchell and husband David of Millville, Eleanor Hulitt and husband Dave of Millville, and Sean McDermott and wife Holly of Palm Coast, FL. She leaves behind her grandchildren, whom she loved and cherished, Kelly Davis, Courtney Craig, Megan Harris, Major Rick Robinson, Colleen Kelly, Sarah Mitchell Weaver, Kevin Mitchell, Vaughn Hulitt, Scott Mitchell, and Mikayla and Shane McDermott. She also leaves her 13 great grandchildren, who loved their Granny-Gran, Alyssa, Madie, Bailey, Scotty, Declan, Brad, Drew, Blake, Johnny, Ronan, Delany, Raegan and Carter. Funeral services will be held at 10 a.m. on Saturday, December 13, 2014 in the Christy Funeral Home, 11 W. Broad Street, Millville. There will be a viewing on Saturday from 9 to 10 a.m. in the funeral home. Burial will follow at the Head of the River Cemetery in Tuckahoe, NJ. For those who choose, donations may be made to the Alzheimer's Foundation - www.alz.org. Memories and expressions of sympathy for Eleanor McDermott may be shared on the Obituary Tribute Wall at: www.christyfuneralservice.com.

Eleanor (Fore) McDermott, age 82, peacefully left this world on Wednesday, December 10, 2014, after a lengthy battle with Alzheimer's disease. The only daughter of the late Francis Patrick Fore and Sara Flanagan of Philadelphia, PA., she... View Obituary & Service Information

The family of Eleanor McDermott created this Life Tributes page to make it easy to share your memories.

Send flowers to the McDermott family.