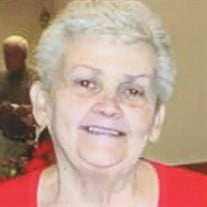 Elaine Marie (Williams) Hilliard, age 76 of Millville, passed away suddenly and unexpectedly Thursday, June 22, 2017 at Inspira Medical Center, Vineland. She had been in declining health for the past year. Born in Millville to the late Kenneth C. Williams Sr. and Margaret (Ammell), she graduated from Millville High School, Class of 1959 and was a life long resident. For 15 years Elaine worked in the lab department at Wheaton Glass Company, and then worked five years at Shannon's Sub Shop. She retired from Prudential Insurance Company in Millville, where she worked for 15 years as a Microfilmer. Elaine was very active in Second United Methodist Church. She taught Beginners Sunday School, and helped in the Nursery with her sister Shirley Boyd and niece Susan Dilks. She belonged to the Edna Dunham Class, and ran the bake sales at the Pot Pie Dinners. Elaine was a very caring and giving person, who would do anything for anyone. She enjoyed spending time with her children, grandchildren and great grandchildren. Elaine loved family gatherings at her brother Kenny's house. She would meet every Monday and Thursday to play Scrabble with her cousins, Carol and Kay. Elaine enjoyed crafting, game shows, shopping and Facebook. She also loved spending time at the counter in Jim's Lunch, socializing. Elaine will be sadly missed by her children, Timothy Wayne Williams and wife Melody of Ft. Pierce, FL., Robert Hilliard and wife Pam of Vineland, Barbara Hilliard of Vineland, Glenn Hilliard of Millville and Michelle Parliman and husband Ryan of Millville; one brother Kenneth C. Williams Jr. of Millville; eight grandchildren, Jeffrey Breeden (Hagop), Timothy Williams (Amanda), Charles Hilliard, Robert Hilliard Jr., Glenn Hilliard II, Ryan Parliman, Kyra Parliman and Trevor Parliman; and two great grandchildren, Emma and Averi Williams. She was predeceased by her husband Robert G. Hilliard in 1986; and her sister Shirley Boyd. Funeral services will be conducted at 11 a.m. on Tuesday, June 27, 2017 in the Christy Funeral Home, 11 W. Broad Street, Millville. Family and friends will be received on Tuesday from 9 to 11 a.m. in the funeral home. Burial will be in Greenwood Memorial Park, Millville. The family requests memorial contributions to New Hope United Methodist Church, 2018 Newcombtown Road, Millville, NJ 08332. Memories and expressions of sympathy for Elaine Hilliard may be shared on the Obituary Tribute Wall at www.christyfuneralservice.com.

Elaine Marie (Williams) Hilliard, age 76 of Millville, passed away suddenly and unexpectedly Thursday, June 22, 2017 at Inspira Medical Center, Vineland. She had been in declining health for the past year. Born in Millville to the late... View Obituary & Service Information

The family of Elaine Marie Hilliard created this Life Tributes page to make it easy to share your memories.

Send flowers to the Hilliard family.