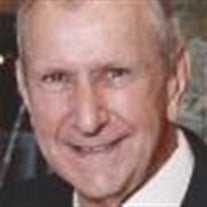 Edwin R. Ernst, age 85 of Millville, passed away Saturday morning, September 19, 2015 at his residence. Born and raised in Manhattan, NY, he graduated high school and Long Island University. Mr. Ernst served in the United States Air Force from 1951 to 1955 during the Korean War as an Airman First Class, where he trained as a Combat Medic. He was stationed in Germany and England. In 1957, he moved to New Jersey where he worked as a Chemist for Exxon Research and Engineering in Annandale for 34 years and retired in 1992. He volunteered and served as the treasurer for the Millville Army Air Field Museum, and he volunteered and served as a docent for the Wheaton Arts and Cultural Center. Mr. Ernst was also an active volunteer for the Kendall Park Emergency Squad, the Carrier Foundation, and the Inspira Health Network, where he put in over 4500 hours. He was an instrument rated pilot and President with the Princeton Flying Club. Mr. Ernst is survived by his wife of 21 years Sandra (McIntyre); his children, Richard Ernst and wife Maryann of FL, Harry Ernst of NJ, Beth E. Allen of NJ, and Wade Ernst and wife Mary Ann of NJ; his step children, Liza-Beth Kline and husband Chris of Easton, PA, and Stephen Kinney and wife Susan (Kline) of Bethlehem, PA; five grandchildren; three great grandchildren; one nephew; and one step granddaughter. He was predeceased by his parents, Harry Ernst and Rebecca (Wallach); and one sister Mali. Graveside services will be conducted at 10:30 a.m. on Tuesday, September 22, 2015 in the Cumberland County Veteran's Cemetery, Bridgeton. In lieu of flowers, memorial donations may be made to www.woundedwarriorproject.org. Arrangements are under the direction of Christy Funeral Home, Millville. Memories and expressions of sympathy for Edwin Ernst may be shared on the Obituary Tribute Wall at www.christyfuneralservice.com.

The family of Edwin R. Ernst created this Life Tributes page to make it easy to share your memories.

Send flowers to the Ernst family.