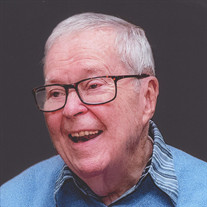 Edward Chew Wheaton, age 95 of Millville passed away Tuesday, August 3, 2021 at home with his loving family by his side. Born in Elizabeth to the late Theodore Corson and Mabel Etta (Chew) Wheaton Jr., he grew up in Rutherford before moving to Millville. In 1944, Edward was inducted into the National Society, Son's of the American Revolution, because he was the son of an active member, Theodore Wheaton Jr., and descendants of Jonadeb Shepard. He joined the United States Army Air Forces and served from 1945 to 1948, and attained the rank of PFC. While in the Army, Edward was assigned to work in the hospital clinical lab. This helped to guide his future career path into the scientific glass and plastic ware business that he eventually built at Wheaton Industries. In 1948, Edward received his A.B.A. in Business Administration from Nichols College in Dudley, MA, and in 1950, he received his B.S. in Business Administration from New York University in NYC. In December of 1950, he married Doris (Morgan), moved to Millville to work in the family business, and start their family. Together they shared 59 wonderful years together until Doris sadly passed away in 2009. In 1992 Edward retired from Wheaton Scientific in Millville as President of the company, where he worked for 42 years. He was a successful businessman and spent many hours working and traveling all over the world. When he wasn't working he enjoyed the views of his backyard landscape, and spending time with his family. Edward spent many summers growing up in Sea Isle City. The tradition continued with his own family, as they also enjoyed spending time on his motorboat and fishing. Edward was a member of the Sea Isle City Yacht Club. He enjoyed participating on the Sailboat Racing Committee that ran the Mid Atlantic Yacht Racing Association Sanction Races for the children and adults of the club. His interest in aircraft also continued throughout his life. Edward owned a single engine 4-Seater Mooney 201 Airplane. Sundays were always a special day by first attending church, eating lunch and going for an afternoon flight. Flying up and down the east coast, enjoying nice crab dinners with Doris near the Chesapeake Bay, and flying out to Wyoming to soar over the Grand Teton Mountain Range were a few of his most memorable trips. During his retirement Edward resumed another passion, Ballroom dancing. He was a skilled practioner of dance including the Waltz, Cha-Cha and a variety of Latin music dances. He traveled to Argentina and other Latin American Countries to learn and master the Tango. He was a member of the South Jersey Ballroom Dance Club. Edward enjoyed going to the First United Methodist Church in Millville, where he enjoyed singing traditional hymns. He was also a member of the Scientific Apparatus Makers Association and the Society for Scientific Glassblowing. Those who knew him will remember him for his kindness, extreme generosity, financial wisdom, and how tediously organized he was. He was a true gentleman to all, and was dedicated and devoted to his family. Edward was a loving husband and father, and will be missed, but always remembered by his six children, Edward Scott Wheaton and his wife Corazon, Douglas Wheaton and his wife Michele, Brian Wheaton and his wife Joyce, Anne Wheaton Ingram, Clifford Wheaton and his wife Tommi-Lynn, and Carolyn Wheaton Bernard; 12 grandchildren; and two great grandchildren. He was predeceased by his wife Doris (Morgan) in 2009; and his siblings, Theodore Corson Wheaton III, and Mabel Elizabeth Wheaton Cobden. Funeral services and burial in Mt. Pleasant Cemetery were private. Arrangements were under the direction of Christy Funeral Home, Millville. In memory of Edward Chew Wheaton, the family requests memorial contributions to the First United Methodist Church, 201 N. Second Street, Millville, NJ 08332. Memories and expressions of sympathy for Edward Chew Wheaton may be shared on the Obituary Tribute Wall at www.christyfuneralservice.com.

Edward Chew Wheaton, age 95 of Millville passed away Tuesday, August 3, 2021 at home with his loving family by his side. Born in Elizabeth to the late Theodore Corson and Mabel Etta (Chew) Wheaton Jr., he grew up in Rutherford before... View Obituary & Service Information

The family of Edward Chew Wheaton created this Life Tributes page to make it easy to share your memories.

Send flowers to the Wheaton family.