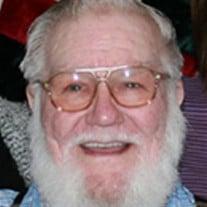 Edward F. Peterson, age 83 of Commercial Twp., passed away Friday evening, June 21, 2019 at his residence with his family by his side. Born and raised in Johnstown, PA to the late Lloyd and Edna (Lydic) Peterson, he moved to Millville in 1965. For 16 years Edward served in the United States Marines as a Staff Sergeant and retired on a disability. He received two Good Conduct Medals (3rd Award and 4th Award), a National Defense Service Medal with one star, and the Presidential Unit Citation. He then worked as a truck driver for Peter Lumber Co. in Millville for 24 years and retired. Edward was a member of St. John Bosco Catholic Church in Millville. He was also an assistant Brownie Leader. Edward enjoyed working on cars, and traveling. One of his favorite trips was his 13,000 mile drive to Alaska in 1992, which took three months. Edward will be sadly missed by his wife Rose (DePra). They would've been married 64 years this September. He will also be missed by his children, Valerie Ann Perry and husband Ken of Millville, Tina Marie Possumato and husband Bob of Chester, VA, and Dawn Marie Hand and husband Oscar of Millville; six grandchildren, Leann Savery and husband Sean, Susan Perry, Alyssa Possumato and Nick Vergara, Nicholas Possumato, Josh Hand and wife Katie, and Kyle Hand; one great grandchild Kylee Hand; and many nieces and nephews. A Mass of Christian Burial will be celebrated at 11 a.m. on Friday, June 28, 2019 in the Parish of All Saints, Buck and Depot Streets, Millville. Family and friends will be received on Thursday from 6 to 8 p.m. and Friday from 9:30 to 10:30 a.m. in the Christy Funeral Home, 11 W. Broad Street, Millville. Entombment will be in Greenwood Memorial Park. The family requests memorial contributions to the Wounded Warrior Project, PO Box 758517, Topeka, KS 66675. Memories and expressions of sympathy for Edward Peterson may be shared on the Obituary Tribute Wall at www.christyfuneralservice.com.

Edward F. Peterson, age 83 of Commercial Twp., passed away Friday evening, June 21, 2019 at his residence with his family by his side. Born and raised in Johnstown, PA to the late Lloyd and Edna (Lydic) Peterson, he moved to Millville in... View Obituary & Service Information

The family of Edward F. Peterson created this Life Tributes page to make it easy to share your memories.

Send flowers to the Peterson family.