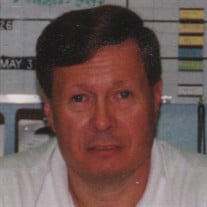 Edward W. Lazarcheck, age 69 of Millville, passed away Monday morning, November 20, 2017 at Inspira Medical Center, Vineland after a lengthy illness. Born in Uniontown, PA to the late Edward and Loretta Lazarcheck, he grew up in Millville and graduated from Millville High School, Class of 1966. Edward joined the U.S. Navy and served during the Vietnam War as an Aviation Ordnanceman and Aircrewman. He was also a Shop Training Officer and Squadron Range Master for small arms qualifications. From 1985 to 1986 he served in the NJ Army National Guard as a M60 Tank Gunner. For over 25 years, Edward worked for Southern State Prison - State of NJ Department of Corrections in various positions, and retired as Sergeant in 2009. He also worked part-time for Underwood Memorial Hospital as a Paramedic. Edward was a member of the Central Baptist Church of Millville. He was a World War II and Railroad modeler, and a Civil War Reenactor. Edward enjoyed hunting, fishing, camping, and NASCAR. He was a lifetime member of the NRA, and restoring old cars with his son, was one of his favorite pastimes. Edward will be sadly missed by his wife of 46 years Jennifer (Bender); one son William Christopher Lazarcheck and wife Magen of Millville; one sister Tracy Adams and husband Donald of KY; and many nieces and nephews. A memorial service will be held at 11 a.m. on January 13, 2018 at the Central Baptist Church, 9 N. 2nd St., Millville. Memorial contributions can be made to the family, or the Central Baptist Church, 9 N. 2nd St., Millville, NJ 08332 or Millville Army Air Field, 1 Leddon St., Millville, NJ 08332. Arrangements are under the direction of Christy Funeral Home, Millville. Memories and expressions of sympathy for Edward Lazarcheck may be shared on the Obituary Tribute Wall at www.christyfuneralservice.com.

Edward W. Lazarcheck, age 69 of Millville, passed away Monday morning, November 20, 2017 at Inspira Medical Center, Vineland after a lengthy illness. Born in Uniontown, PA to the late Edward and Loretta Lazarcheck, he grew up in Millville... View Obituary & Service Information

The family of Edward W. Lazarcheck created this Life Tributes page to make it easy to share your memories.

Send flowers to the Lazarcheck family.