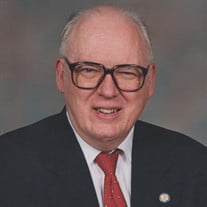 Edward L. "Ed" Abbott, age 76 of Vineland, passed away suddenly and unexpectedly at home on Monday, April 23, 2018.   Born and raised in Millville to the late Albert and Edith (Heaton) Abbott, Ed graduated from Millville High School and then went on to receive his Associates Degree in History from Monmouth College. He was a longtime resident of Millville until moving to Vineland in 1999.   Ed spent several years working in the packing house at Wheaton Glass Company in Millville before going to work at Prudential in Millville, where he spent over 30 years working as a computer analyst, and then retired when the office closed in 1998.   Ed was a member of the Evening Star Lodge #97, F&AM Masonic Lodge in Cedarville for over 55 years, where his title was known as White Worshipful Edward L. Abbott, past Grand Chaplain. Ed was extremely active with the Lodge, serving as Master seven different times over the years. He was involved with every aspect of the Lodge, helping in countless ways and will be sadly missed by his fellow members.   Ed was also a devoted member of the Centre Grove United Methodist Church in Millville, joining his church family in April of 1994.  In similar fashion to the Masonic Lodge, Ed was extremely active at his church, as he was the church organist and participated faithfully in much of the behind the scenes work at the church, preparing the weekly church bulletins and whatever else he could do to lend a hand. Ed had a heart of gold and truly enjoyed helping other people.   Ed was an avid train collector of primarily HO Scale trains, and had several fish tanks in his home, which over the years contained many different rare kinds of aquatic life. He also looked forward to spending time with his friends and family.   Ed is survived by three cousin, Charles Reiser and wife Carol; and best friends Betty McAlpine and Tara Emeigh.   Funeral Services for Ed will be conducted on Friday, May 11, 2018 at 11:00 a.m. in the Christy Funeral Home, 11 W. Broad Street, Millville. There will be a viewing on Thursday evening in the funeral home from 6:00 p.m. to 8:00 p.m. with a Masonic Service beginning promptly at 7:00 p.m., and a second viewing on Friday morning from 10:00 a.m. to 11:00 a.m. in the funeral home. Burial will be in Mt. Pleasant Cemetery, Millville.   Memories and expressions of sympathy for Edward L. Abbott may be shared on the Obituary Tribute Wall at: www.christyfuneralservice.com.

The family of Edward L. Abbott created this Life Tributes page to make it easy to share your memories.

Send flowers to the Abbott family.