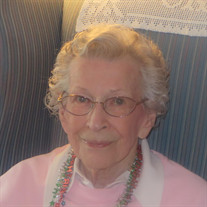 Edna (Konschak) Zimmerman, age 102 of New Holland, PA, and formerly of Millville, passed away Tuesday, April 25, 2017 after a long and active life. Born in Philadelphia, PA to the late Adolph and Louise (Rau) Konschak, she grew up in Millville and attended Millville schools. Edna owned and operated Edna's Beauty Shoppe on North High Street in Millville for many years. She also managed Zimmerman Funeral Home in Millville that her late husband owned. She was a member of St. Paul's Lutheran Church in Millville, and Shekinah No. 82, Order of Eastern Star, Millville for over 60 years. In the early 1950's she moved to North Jersey and lived there for 40 years, before moving to Pennsylvania 32 years ago. Edna enjoyed writing letters, playing Rummikub, butterflies, and she was very active in the Trinity Lutheran Church of New Holland, PA, well into her 101st year. She truly enjoyed life to the fullest. Edna is survived by one sister-in-law Margaret Konschak of Millville; two nieces, Louise Van Gilder and husband Terry of CMCH, and Walda Passaro of Millville; one nephew Jeffrey Zimmerman and wife Darlene of Maine; and many great nieces and nephews. She was predeceased by her husband Richard B. "Dick" Zimmerman in 2005; one brother Walter Konschak; and two sisters, Emily Walti and Eleanor Jacquet. Funeral services will be conducted at 11 a.m. on Monday, May 1, 2017 in the Christy Funeral Home, 11 W. Broad Street, Millville. There will be a viewing on Monday from 10 to 11 a.m. in the funeral home. Burial will be private. In lieu of flowers, the family requests memorial contributions to St. Paul's Lutheran Church, 301 N. Third Street, Millville, NJ 08332. Memories and expressions of sympathy for Edna Zimmerman may be shared on the Obituary Tribute Wall at www.christyfuneralservice.com.

Edna (Konschak) Zimmerman, age 102 of New Holland, PA, and formerly of Millville, passed away Tuesday, April 25, 2017 after a long and active life. Born in Philadelphia, PA to the late Adolph and Louise (Rau) Konschak, she grew up in Millville... View Obituary & Service Information

The family of Edna Zimmerman created this Life Tributes page to make it easy to share your memories.

Send flowers to the Zimmerman family.