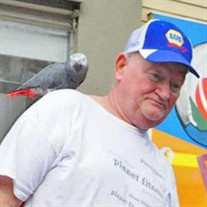 Earl William Polhamus, Sr., age 73 of Millville, passed away peacefully on Friday, December 10, 2021 at Inspira Medical Center in Vineland after a brief illness.   Born in Millville to the late Earl and Kathleen (Stadler) Polhamus, Earl was raised in Leesburg. He proudly served in the United States Marine Corps from 1969 until 1973. Once he completed his service to his country, Earl settled in Millville, where he raised his family and was a lifelong resident.   Earl was a maintenance worker at Shieldalloy Corp. in Newfield for over 36 years, and retired in 2005 when the plant closed down.   He loved working with wood and was quite a skilled artisan, creating countless gifts over the years for his family and friends.   Earl will be sadly missed by his son Earl Polhamus, Jr. of Woodbine; daughter Lisa Polhamus of Greenville, NC; son Brian Polhamus and wife Kayla of Heislerville; son Gary Polhamus and wife Karen of Milton, FL; three step-children, Gina Johnson, Louis Guido, and Susan Radie; many grandchildren; several great-grandchildren; his twin brother Lewis Polhamus and wife Sandra of Millville; sister Ellen Cossaboon and husband Pete of Vineland; many nieces, nephews, and cousins; and his loving bird Buckwheat. He was predeceased by his wife Nikki (Guido) Polhamus in August 2016; two sisters, Kay Peterson and Diane Mammi; and his brother Bob Charles Polhamus. A Memorial Service for Earl will be conducted on Wednesday, December 22, 2021 at 11:00 a.m. in the Christy Funeral Home, 11 W. Broad Street, Millville. Family and friends will be received from 10 to 11 a.m. in the funeral home. Burial will be in Greenwood Memorial Park, Millville. In lieu of flowers memorial contributions in loving memory of Earl may be made to the Veteran’s Multi-Service Center, Attn: Earl Polhamus, Sr. Memorial, 213 North 4th Street, Philadelphia, PA 19106 or online at: https://app.etapestry.com/onlineforms/ThePhiladelphiaVeteransMulti-/donate.html. Memories and expressions of sympathy for Earl William Polhamus, Sr. may be shared on the Obituary Tribute Wall at: www.christyfuneralservice.com.

Earl William Polhamus, Sr., age 73 of Millville, passed away peacefully on Friday, December 10, 2021 at Inspira Medical Center in Vineland after a brief illness.   Born in Millville to the late Earl and Kathleen (Stadler) Polhamus, Earl was... View Obituary & Service Information

The family of Earl William Polhamus, Sr. created this Life Tributes page to make it easy to share your memories.