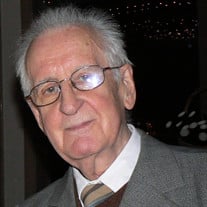 Dr. Jerzy Piszcz Sr., age 89 of Millville, passed away Tuesday evening, November 17, 2015 at Inspira Medical Center after a brief illness. Born and raised in Bydgoszcz, Poland, then at the age of 13 he was taken into forced labor during the Nazi Occupation. He was also active with the Underground Partisan Movement Home Army. After WWII he was a political prisoner during the era of Stalinism. Dr. Piszcz was then able to resume his education, graduate high school and attend the Academy of Economy and the University of Poznan, receiving a college degree. During his time in forced labor he met his future wife. Dr. Piszcz was a lecturer on Economic Theory on the national level. His Catholic faith was his strength and foundation for his life. After the University his knowledge of economy lead him to be the President of Polish Industries for disabled workers. After his retirement he spent the last 25 years living between continents: wintering with his Millville family, and summering in Poland. Dr. Piszcz was a member of the Polish Association of Former Political Prisoners of Stalin Era, and the Polish Association of War Veterans. For the past 15 years he was a friend of the Kosciuszko Foundation, which is a Polish cultural society, where he participated in all the Philadelphia, PA chapter events. He was also a member of St. Mary Magdalen Roman Catholic Church in Millville. He was an avid reader, especially world history, economics and politics of the 20th century. He was a very warm and friendly gentleman towards others, and he loved the Latin language. Dr. Piszcz will be sadly missed by his daughter Dr. Malgorzata Piszcz-Connelly and husband Daniel of Millville; his son Dr. Jerzy Piszcz Jr. and wife Malgorzata of Poland; two brothers, Dr. Edmund Piszcz, Metropolitan Arch Bishop of Warmia, Poland, and Tadeuz Piszcz of Poland; and four grandchildren, Matthew, Elizabeth, Kenneth and David Connelly. He was predeceased by his wife Klara Sawinska-Piszcz in 2001; and his parents, Wojciech Piszcz and Stanislawa Jedrzejewska. Funeral services will be conducted at 8 p.m. on Monday, November 23, 2015 in the Christy Funeral Home, 11 W. Broad Street, Millville. There will be a viewing on Monday from 6 to 8 p.m. in the funeral home. Burial will take place, later in the week in Bydgoszcz, Poland. The family requests memorial contributions to Kosciuszko Foundation Philadelphia Chapter, Attn: Yolanta Roman, 8840 Stenton Ave., Philadelphia, PA 19118. Memories and expressions of sympathy for Dr. Jerzy Piszcz may be shared on the Obituary Tribute Wall at www.christyfuneralervice.com.

Dr. Jerzy Piszcz Sr., age 89 of Millville, passed away Tuesday evening, November 17, 2015 at Inspira Medical Center after a brief illness. Born and raised in Bydgoszcz, Poland, then at the age of 13 he was taken into forced labor during... View Obituary & Service Information

The family of Dr. Jerzy Piszcz Sr. created this Life Tributes page to make it easy to share your memories.