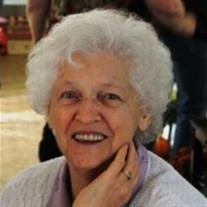 Dorothy "Dot" E. (Swartz) Krobath, age 86, of Vineland, passed away Saturday evening, November 14, 2015, at her residence. She was affectionately known as "Aunt Dot" or "Nan." Born in Cambria County, PA, Mrs. Krobath grew up in Nanty Glo, PA, and moved to Millville when she was 17 years old. In 2009, she moved to Vineland. In 1947, she was married in St. Mary Magdalen Roman Catholic Church, and raised her family. Mrs. Krobath retired from Kerr Glass as a packer, and she was a member of the GBBA. She was a Den Mother for the Cub Scouts for many years. Mrs. Krobath was a member of the First Assembly of God Church in Millville, where she was a Sunday School Teacher, Cradle Roll Superintendent, and Missionettes Leader. She held many youth group events in her basement and assisted with the Teen Social preparations, Thanksgiving Food baskets, and counting the offering with the Church Treasurer. She was also a member of Fairton Christian Center where she enjoyed assisting with the Church Christmas dinners. She was known as a great baker of cakes, pies, and desserts and she baked many wedding cakes. Mrs. Krobath was known for her good home cooking, and she provided a warm and loving home for local people in need. She also housed two foreign exchange students from Chili and Finland. In her later years she and her husband volunteered for Hospice of South Jersey and Operation Blessing. Mrs. Krobath is survived by one son David R. Krobath and wife Deborah of Houston, TX; one daughter Carol Malone and husband Dan Sr. of Vineland; one brother Ralph Swartz of Millville; three grandchildren, Kevin Krobath and wife Catherine, Dan Malone Jr. and wife Kristy, and Ryan Malone; and many nieces and nephews. She was predeceased by her husband Raphael Charles Krobath in 2014; her parents, Clarence and Bertha (Meck) Swartz; three brothers, Albert, Melvin and Roy Swartz; and five sisters, Eleanor Paul, Jessie Kerr, Ethel Scott, Joan Kasarnich, and Mabel Swartz. Funeral services will be conducted at 1 p.m. on Thursday, November 19, 2015 in the Christy Funeral Home, 11 W. Broad Street, Millville. Visitations will be held from 6 to 8 p.m. on Wednesday, and from 11 a.m. to 1 p.m. on Thursday in the funeral home. Burial will be in Greenwood Memorial Park, Millville. Memories and expressions of sympathy for Dorothy Krobath may be shared on the Obituary Tribute Wall at www.christyfuneralservice.com.

The family of Dorothy E. Krobath created this Life Tributes page to make it easy to share your memories.

Send flowers to the Krobath family.