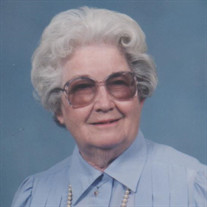 Dorothy (Peterson) Hatcher, went to be with the Lord February 24, 2017. Born in Millville on July 2, 1921, she was the daughter of the late Cecil S. and Maude (Travis) Peterson. She was 16 years old when she graduated from Millville High School in 1938, while working part time as a Clerk at J.J. Newberry. She then attended Vineland Business School for two years. In 1941 Dorothy married Earl Hatcher Jr. and raised her family. In 1950 she became the bookkeeper for Solof's Hardware. After ten years, in 1960 Dorothy was offered a job in the accounting department at Wheaton Pentagon. In 1966 all the Wheaton companies merged into one corporation and she was made Head Cashier of all Wheaton Industries. She held this position until she retired in 1983, after 23 years with Wheaton. She was active in PTA's, and was a coordinator for Girl Scouts when her daughters were active. She also was an active member of Fourth United Methodist Church for more than 60 years, where she played the piano for the primary department for many years and filled in when needed on the organ. She was a member of the Clara Jones Sunday School Class. Dorothy was also one of the musical Hatchers who entertained throughout South Jersey. She was the family seamstress and was quite adept at crocheting and tatting. She enjoyed cooking, camping and gardening. Dorothy was predeceased by her husband Earl in 1993 after 51 great years of marriage; brother Brinton Peterson and his wife Eunice (Lee); and two sons-in-law, Everett Hogan and John Radig. She is survived by two sons, Earl Hatcher (Kathryn) of St. Augustine, FL, and Tom Hatcher (Nancy) of Millville; two daughters, Dorothy Radig of Millville, and Earleen Flanagan (William) of Vineland; 13 grandchildren; 14 great grandchildren; one great great grandchild; and many nieces, nephews and cousins. Funeral services will be conducted at 11 a.m. on Wednesday, March 1, 2017 in the Christy Funeral Home, 11 W. Broad Street, Millville. There will be a viewing on Wednesday from 10 to 11 a.m. in the funeral home. Burial will be in Mt. Pleasant Cemetery, Millville. The family requests memorial contributions to the Fourth United Methodist Church, 308 Kates Blvd., Millville, NJ 08332. Memories and expressions of sympathy for Dorothy Hatcher may be shared on the Obituary Tribute Wall at www.christyfuneralservice.com.

Dorothy (Peterson) Hatcher, went to be with the Lord February 24, 2017. Born in Millville on July 2, 1921, she was the daughter of the late Cecil S. and Maude (Travis) Peterson. She was 16 years old when she graduated from Millville High... View Obituary & Service Information

The family of Dorothy May Hatcher created this Life Tributes page to make it easy to share your memories.

Dorothy (Peterson) Hatcher, went to be with the Lord February...

Send flowers to the Hatcher family.