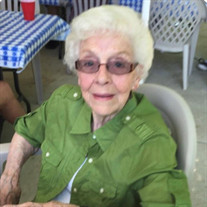 Dolores A. Gebhardt, a loving mother, grandmother and great grandmother passed away Saturday, September 18, 2021 after a brief illness at home, under the care of Bayada Hospice. She was 94 years old, just three days shy of turning 95. Born in Bridgeton, she grew up on a farm and graduated from Woodstown High School, Class of 1944. Dolores moved to Bridgeton before moving to Millville in 1968, where she became a lifelong resident. Dolores worked in banking her entire career, and retired as the Bank Vice President from Century Savings Bank, Vineland in 2006 at the age of 79. She was a member of the New Hope United Methodist Church of Millville, where she also volunteered as the Church Financial Secretary. She enjoyed gardening, but most of all, she loved spending time with her family. Dolores is survived by her daughter, Pat Hayes (Bill) of Vineland; two stepsons, Paul Royal Jr. (Judy) of Millville, and Bruce Gebhardt (Lauren) of NY; six grandchildren, Kathy Garrison (George), Suzie Dalgleish (Gary), Shelley Spears (Josh), Dave Hayes (Laura), Alix Gebhardt and Dale Gebhardt; five great grandchildren, Connor and Ethan Dalgleish, Ella and Nate Rivera, and Abigail Spears; and many nieces and nephews. She was predeceased by her husband William A. Gebhardt in 2015; her mother Laura (Carson) Fisher; and her siblings, Eugene, Franklin, twin sister Betty Hughes, and Leah Frazer. Funeral services for Dolores will be conducted at 11 a.m. on Wednesday, September 22, 2021 in the Christy Funeral Home, 11 W. Broad Street, Millville. Family and friends will be received on Wednesday from 9:30 to 11 a.m. in the funeral home. Entombment will be in Greenwood Memorial Park, Millville. In memory of Dolores, the family requests memorial contributions to The Children's Hospital of Philadelphia Foundation, P.O. Box 781352, Philadelphia, PA 19178-1352. Memories and expressions of sympathy for Dolores A. Gebhardt may be shared on the Obituary Tribute Wall at www.christyfuneralservice.com.

Dolores A. Gebhardt, a loving mother, grandmother and great grandmother passed away Saturday, September 18, 2021 after a brief illness at home, under the care of Bayada Hospice. She was 94 years old, just three days shy of turning 95.... View Obituary & Service Information

The family of Dolores A. Gebhardt created this Life Tributes page to make it easy to share your memories.

Dolores A. Gebhardt, a loving mother, grandmother and great grandmother...

Send flowers to the Gebhardt family.