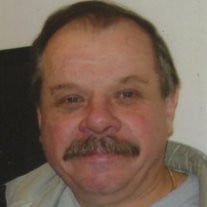 Dennis W. Bradford Sr., age 56 of Millville, died Tuesday, November 19, 2013 as a result of an automobile accident. Born and raised in Millville, he graduated from Millville High School, class of 1975. For many years, he worked as an automobile mechanic, and most recently worked for Rossi Honda in Vineland. Mr. Bradford was an avid NASCAR fan, and was a member of the New Jersey Motorsports Park in Millville. In his younger days, he enjoyed hunting and fishing. Mr. Bradford now lays in Heaven with his father Earl Bradford Sr. He is survived by his mother Helen (Dempsey) Bradford; his son Dennis W. Bradford Jr. of Vineland; his daughter Jamie Bradford of Philadelphia, PA; his former wife Brenda (Burchett) Bradford; his step mother Carol Bradford; one brother Earl Bradford Jr. of Millville; two sisters, Linda Davis and Alfred of Millville, and Shari Bradford of Millville; and six nieces and nephews, Nicholas Simpkins, Stacie Bradford, Allison Davis, Johnathan Davis, Kacey Edwards, and Aliyah Santana. A memorial service will be conducted at 11 a.m. on Saturday, November 30, 2013 in the Christy Funeral Home, 11 W. Broad Street, Millville. Family and friends will be received on Saturday from 9 to 11 a.m. in the funeral home. Burial will be private. In lieu of flowers, please make a donation in Dennis’ name to the Dale Earnhardt Foundation, which benefits children, education and environmental preservation, 1675 Dale Earnhardt Highway No. 3, Mooresville, NC 28115. Memories and expressions of sympathy for Dennis Bradford Sr. may be shared on the Obituary Tribute Wall at: www.christyfuneralservice.com.

Dennis W. Bradford Sr., age 56 of Millville, died Tuesday, November 19, 2013 as a result of an automobile accident. Born and raised in Millville, he graduated from Millville High School, class of 1975. For many years, he worked... View Obituary & Service Information

The family of Dennis W Bradford Sr. created this Life Tributes page to make it easy to share your memories.