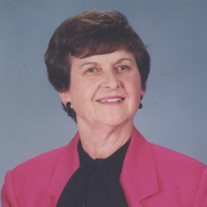 Deborah F. (Cottrell) Kendall, age 93 of Millville passed away Monday evening, March 25, 2019 at Eagleview Healthcare and Rehabilitation Center in Pittsgrove. Born in Millville, Deborah was a lifelong resident. She was the daughter of the late Willard and Margaret (Beakley) Cottrell. During World War II, she worked at T.C. Wheatons in the Art Department. She was a homemaker, and also a loving, and caring mother and sister. She enjoyed going to flea markets and yard sales, and she enjoyed spending time at the Jersey shore with her family. Deborah was a member of the Maranatha Baptist Church. She was the wife of the late Joseph "Nuke" Kendall Jr. She is survived by her son Joseph Kendall III of Aurora, Colorado; grandson Joseph Kendall IV and wife Melissa of CO; great grandson Dion Kendall of CO; great granddaughter Kaylee of CO; one brother Mulford Cottrell and wife Jackie of Millville; two sisters, Betty Cossaboon of Millville, and Mable Cook and husband Stanley of Delran; Godson Craig Cossaboon of Estell Manor; and many nieces and nephews. She was predeceased by four brothers, Marvin, Fred, Willard Jr., and Richard; one sister Helen Randazzo; Goddaughter Valerie Cook; niece Alita Randazzo; her brother-in-law Wayne Cossaboon; and her dear friend Anna "Nancy" Dilks. Also, a special 'thank you' to the Eagleview staff, especially Dr. Ahmed, and all the nurses and aides who cared for Deborah. Funeral services will be conducted at 11 a.m. on Tuesday, April 2, 2019 in the Christy Funeral Home, 11 W. Broad Street, Millville. There will be a viewing on Tuesday from 10 to 11 a.m. in the funeral home. Burial will be in Mt. Pleasant Cemetery, Millville. For those who wish, memorial contributions may be made to Maranatha Baptist Church, 1524 Bridgeton-Millville Pike, Millville, NJ 08332 or Caring Hospice Services, 133-Q Gaither Drive, Mt. Laurel, NJ 08054. Memories and expressions of sympathy may be shared on the Obituary Tribute Wall at www.christyfuneralservice.com.

Deborah F. (Cottrell) Kendall, age 93 of Millville passed away Monday evening, March 25, 2019 at Eagleview Healthcare and Rehabilitation Center in Pittsgrove. Born in Millville, Deborah was a lifelong resident. She was the daughter of the... View Obituary & Service Information

The family of Deborah F. Kendall created this Life Tributes page to make it easy to share your memories.

Send flowers to the Kendall family.