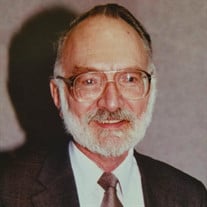 Daniel Frank Baer, Sr., age 81 of Millville, passed away peacefully at home on Tuesday, September 29, 2020. The son of the late Howard M. and Cyrena M. (Houck) Baer, Daniel was a native of the Fishtown Section of Philadelphia. He attended Frankford High School and the Wharton School at the University of Pennsylvania. Daniel was active in the Financial Industry in excess of 38 years, and was the CEO at Millville Savings and Loan Association for over 27 years, retiring in 2001. He was a Past Director of Financial Accounting Services, Inc. and the Past President of the Cumberland County Savings League. Daniel served on the board of the YMCA, the United Way, and was instrumental along with five others in the reactivating of the Millville Chamber of Commerce. He was its original Membership Chairman and Professional Division Vice President. He enjoyed antique automobiles, especially Packards. He was a member of the Millville Masonic Temple Shekinah, F & A Masons Chapter Nos. 58 and 82. He was also extremely proud of his dual Swiss-American citizenship, and was an aficionado of St. Bernard dogs. Daniel was predeceased by his parents; his wife of 54 years, JoAnn M.; as well as his siblings, Howard Baer, Delores Goltz, Mary Gutteridge, and Charlotte Baer. He is survived by his children, Donna M., Daniel F., Jr. (Deborah), and Darren F.; grandsons, Michael F. Stolar (Mary Beth), Brandon H. Stolar (Elisa) and Daniel F., III; one great grandchild, Rosemary; and several nieces and nephews. A private Graveside Service will be conducted in Philadelphia at the Baer Family Plot. Arrangements are under the direction of the Christy Funeral Home, Millville. Memorial contributions in memory of Daniel may be made to the Crohn's and Colitis Foundation of America, National Headquarters, ATTN: Financial Operations, 733 Third Avenue, Ste. 510, New York, NY, 10017 or at the website: crohnscolitisfoundation.org. Memories and expressions of sympathy for Daniel Frank Baer, Sr. may be made on the Obituary Tribute Wall at: www.christyfuneralservice.com.

Daniel Frank Baer, Sr., age 81 of Millville, passed away peacefully at home on Tuesday, September 29, 2020. The son of the late Howard M. and Cyrena M. (Houck) Baer, Daniel was a native of the Fishtown Section of Philadelphia. He attended... View Obituary & Service Information

The family of Daniel Frank Baer, Sr. created this Life Tributes page to make it easy to share your memories.