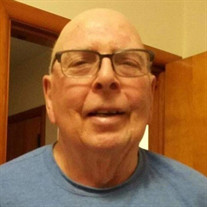 Clarence A. ("Butch" / "Bunky") Maul, III, age 83 of Millville, went home to heaven on Sunday, March 7th, 2021. Born and raised in Millville to the late Clarence and Myrtle (Dyer) Maul, Clarence was a lifelong Millville resident. Clarence was a graduate of Millville High School. He served in the Army from 1961-1963. He then worked at Maul Brothers as a foreman for over 30 years until his retirement. Clarence was an enthusiastic Christian and a member of Trinity United Methodist Church and recently First United Methodist Church of Millville. While at Trinity, Clarence served as custodian, taught Sunday School, and trained acolytes. He was also an usher, an MYF advisor, helped with the sound system, the men's breakfasts, and served on the Administrative Council. For years, Clarence also served as a Ranch Hope board member. In his earlier years, Clarence was an enthusiastic Little League umpire. He enjoyed riding his motorcycle and attending Flyers games with his mother Myrtle. He was also an avid Phillies and Eagles fan. Clarence was a very social person and enjoyed eating out frequently. He was always known for being on time, if not early, to all meetings and engagements. Clarence will be sadly missed by his cousins, Doug Carll of Pittsgrove, Ed Carll of Shamong, Don Carll of Saluda, NC and Linda Babcock of Absecon; and best friends, Carol Coffee of Millville, and Mulford and Jackie Cottrell of Millville. He was predeceased by his infant sister Judith Ann. A funeral service for Clarence will be conducted on Friday, March 12, 2021 at 1:00 p.m. in the Christy Funeral Home, 11 W. Broad Street, Millville. Family and friends will be received from 12 noon to 1:00 p.m. in the funeral home. Burial will be in Mt. Pleasant Cemetery, Millville. Please remember to practice social distancing while in the funeral home and cemetery. Also, masks are required to be worn in the funeral home at all times. In lieu of flowers, memorial contributions in Clarence's memory may be made to the First United Methodist Church, 201 N. 2nd St., Millville, NJ 08332 or to Ranch Hope, Inc., PO Box 325, 45 Sawmill Road, Alloway, NJ 08001 or at the website: ranchhope.org. Memories and expressions of sympathy for Clarence A. Maul, III may be shared on the Obituary Tribute Wall at: www.christyfuneralservice.com.

The family of Clarence A. Maul, III created this Life Tributes page to make it easy to share your memories.