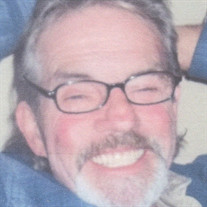 Clarence "Hairbone," "Beatle," D. Baxter, age 65 of Vineland, passed away Wednesday afternoon, July 23, 2014 at his residence. Born in Millville on December 20, 1948, he attended Millville Schools. He worked at Armstrong Cork Co., Kerr Glass and Foster Forbes in the shipping department as a fork lift driver until the plant closed. He then worked a short while at both, Minots in Bridgeton and Rock Tenn in Vineland. He belonged to the Teamsters Union No. 676. Clarence loved to fish, both freshwater and saltwater. He also enjoyed holiday dinners with family, and he really liked decorating and dressing up for Halloween. Over the years, he also loved fixing and driving things: he built and drove a three wheeled Harley Davidson, he owned several saltwater and freshwater boats, he had dune buggies built from old VW's, he had a partially custom van (used for van rally's), and he also owned snowmobiles. He is survived by his daughter Crystal Rodriguez and husband Franklin of Mays Landing; one sister Carol Saul of Millville; five brothers, Thomas Jr. of Powatan, VA, Fred and companion Rose of Millville, Frank and companion Ann of Laurel Lake-Millville, Donald of Millville, and Harry and wife Sue of Hollywood, FL; his ex-wife Vicky (Grotti) Baxter of Mays Landing; many nieces, nephews, great nieces and great nephews; and his best friends, Wayne and Polly Jeannette, and Gilbert Cheeseman. He was predeceased by his parents, Thomas C. Baxter Sr. and Harriet (Weber); and his sister Joyce Panzner. Funeral services will be conducted at 10 a.m. on Monday, July 28, 2014 in the Christy Funeral Home, 11 W. Broad Street, Millville. Viewings will be Sunday from 6 to 8 p.m. and Monday from 9 to 10 a.m. in the funeral home. Burial will be in Greenwood Memorial Park, Millville. In lieu of flowers, memorial donations can be made in Clarence's name to the American Cancer Society, 1851 Old Cuthbert Road, Cherry Hill, NJ 08034 or to Clean Ocean Action, 18 Hartshorne Drive, Suite 2, Highlands, NJ 07732. Memories and expressions of sympathy for Clarence Baxter may be shared on the Obituary Tribute Wall at: www.christyfuneralservice.com.

The family of Clarence D. Baxter created this Life Tributes page to make it easy to share your memories.

Send flowers to the Baxter family.