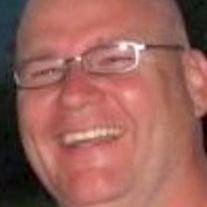 Christopher Todd Groff Sr., age 49 of Millville died suddenly Sunday, February 2, 2014. Born in Vineland, he grew up in Millville and graduated from Millville High School, class of 1982. For over 20 years, Mr. Groff worked for the Millville Police Department, where he began as a Patrolman and rose to the rank of Sergeant. He then transferred to the New Jersey Human Services, where he retired as a Firearm’s Instructor. Mr. Groff was the President of the PBA for many years and an arson investigator. He was an active member with Millville PAL, and was a D.A.R.E. officer with the Millville Public School System. Mr. Groff was a member of the West Park United Methodist Church in Shiloh, and a member of the Cumberland Riflemen’s Club. He was an avid dart player, and he loved music. He thoroughly enjoyed his yearly trout fishing trips to West Virginia. He is loved by many family and friends, and will be dearly missed. Mr. Groff is survived by his wife Denise (Clair) of Millville; his children, Christopher T. Groff Jr. (Darcy), and Missy Groff, all of Millville; his mother Margaret (Dobson) Jenkins of Millville; his siblings, Toni Fenoff (Craig) of PA, Rosalie Stevens (Bill) of Millville, John Groff of Mays Landing, Scott Groff (Sherri) of Millville, Erik Groff (Danielle) of Minotola, Marie Groff of Millville, and Mary Kathryn Jenkins (Chuck Oliver) of Mullica Hill; two grandchildren, Zachary Groff and Nathan McClintock; and many nieces and nephews. He was predeceased by his father Billie L. Jenkins in 2009. A memorial service will be conducted at 3 p.m. on Friday, February 7, 2014 in the Christy Funeral Home, 11 W. Broad Street, Millville. Family and friends will be received on Friday from 9 a.m. to 3 p.m. in the funeral home. Burial will be private at a later date. Memories and expressions of sympathy for Christopher Groff Sr. may be shared on the Obituary Tribute Wall at: www.christyfuneralservice.com.

The family of Christopher Todd Groff Sr. created this Life Tributes page to make it easy to share your memories.