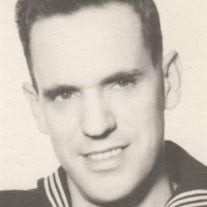 Charles Edward Wright, age 79 of Millville, passed away peacefully on Wednesday, February 19, 2014, at home. His health had been in decline over the last year. Mr. Wright was born in Smithfield, NY, and was the son of the late Harold Wright and Ethel (Hurd) Wright. He married Rose Marie Stailey in 1955. They were married for fifty-seven years prior to her death in 2011. He enlisted in the US Navy in 1951, proudly giving twenty-one years of service. He served aboard on several aircraft carriers, including the USS Valley Forge and the USS Coral Sea. He received several medals, including the National Defense Service Medal with a Bronze Star. During these years he lived in several states including California, before making his home in Millville. After retiring from the US Navy, he was employed by the Millville Hospital as a boiler operator for ten years. He enjoyed the outdoors and camping. Mr. Wright was a member of St. John Bosco Catholic Church of Millville. Survivors include six children, three sons, Charles J. Wright and wife Lori of Millville, Edward A. Wright of Florida, and Michael S. Wright of Vineland; three daughters, Karen A. Jenkins and husband Paul of Newfield, Susan M. Jenkins of Newfield, and Rose M. Wright of Vineland. He is also survived by 15 grandchildren; 23 great grandchildren; two brothers; and one sister. Funeral services will be conducted at 11 a.m. on Monday, February 24, 2014 in the Christy Funeral Home, 11 W. Broad St., Millville. There will be a viewing on Monday from 10 to 11 a.m. in the funeral home. Burial, with military honors will take place in the Cumberland County Veteran’s Cemetery in Hopewell Twp. . The family requests, in lieu of flowers, memorial contributions to be sent to the House of Charity, Bishop’s Annual Appeal, Diocese of Camden, PO Box 6006, Bellmawr, NJ 08099. Memories and expressions of sympathy for Charles Wright may be shared on the Obituary Tribute Wall at: www.christyfuneralservice.com.

Charles Edward Wright, age 79 of Millville, passed away peacefully on Wednesday, February 19, 2014, at home. His health had been in decline over the last year. Mr. Wright was born in Smithfield, NY, and was the son of the late Harold... View Obituary & Service Information

The family of Charles Edward Wright created this Life Tributes page to make it easy to share your memories.

Send flowers to the Wright family.