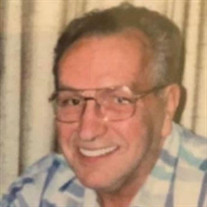 Charles DeWarren Starn, age 88 of Vineland, passed away from a broken heart early Monday morning, March 29, 2021 at the home of his daughter Thelma, surrounded by his family. Born in Somers Point to the late Edwin and Thelma (Wolf) Starn, he grew up in Vineland, and joined the United States Marine Corps in 1952. Charles served three years during the Korean War as a Corporal. For 44 years, he worked as a glassworker for Kimble Glass Co. in Vineland and retired in 1994. While working there, he met his wife Ruth and together they shared 62 wonderful years of marriage together until she sadly passed away on April 8, 2020. Early on in their marriage, Charles took on the roll as a father to four of Ruth's siblings, Danny, Raymond, John and Frany who sadly lost their parents at a young age. Charles and Ruth happily raised them as well as their own three children. Charles was a member of the American Legion and the VFW Post No. 2071, both in Franklinville, and the American Flint Glass Workers Union. He was also a member of the Marine Corps League of Vineland and served as Commandant in the early 1970s. Charles was a loving husband, father and grandfather, and he truly cherished his time spent with his grandchildren and great grandchildren. Charles will be sadly missed by his children, Brian Starn of Vineland, Debra Ferguson (deceased), and Thelma Warfle and husband Kelsey Sr. of Vineland; eight grandchildren, Brian, Stephanie, Josh, Christopher, Jennifer, Kelsey Jr., Charles and Tylar; and 11 great grandchildren, Brian, Amaya, Manual, Jaclynn, Aubree, Bobby, Ethan, Logan, Kylie, Allura, and Talon. He was predeceased by his wife Ruth (Allen); one daughter Debra Ferguson; and his siblings, Edwin, John, Leroy, Betty, Evelyn, Milford, Donald and Kenny. Funeral Services for Charles, and a Memorial Service for Ruth will be celebrated together at 11 a.m. on Monday, April 5, 2021 in the Christy Funeral Home, 11 W. Broad Street, Millville. Family and friends will be received on Monday from 9 a.m. to 11 a.m. in the funeral home. Please remember to wear a mask at all times and practice social distancing while in attendance. Burial will be private in Greenwood Memorial Park at a later date. Memories and expressions of sympathy for Charles Starn may be shared on the Obituary Tribute Wall at www.christyfuneralservice.com.

Charles DeWarren Starn, age 88 of Vineland, passed away from a broken heart early Monday morning, March 29, 2021 at the home of his daughter Thelma, surrounded by his family. Born in Somers Point to the late Edwin and Thelma (Wolf) Starn,... View Obituary & Service Information

The family of Charles DeWarren Starn created this Life Tributes page to make it easy to share your memories.

Charles DeWarren Starn, age 88 of Vineland, passed away from...

Send flowers to the Starn family.