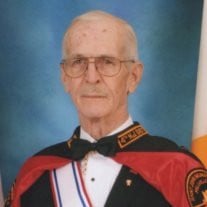 Charles Bernard Ritzler Jr., age 81 of Millville, passed away Thursday morning, August 1, 2013 with his family by his side. Born in New York, he moved to New Jersey as a child and attended St. Mary Magdalen School. Mr. Ritzler served in the United States Army during the Korean War. He received a Combat Infantry Badge, a Korean Service Medal with five bronze service stars and a Republic of Korea Presidential Unit Citation. For many years, he worked as a truck driver for several local companies. He was an active member of the Parish of All Saints in Millville, serving as an usher for many years. He also volunteered with its food pantry. He was also a member of the Knights of Columbus Council No. 1778 and 4th Degree Assembly No. 1749. An avid collector of model cars, he also enjoyed woodworking and vacationing with his family in Ocean City. Mr. Ritzler is survived by his children, Mimi Fralick and husband Ron of Millville, and Charles B. Ritzler III and wife Michelle of Vineland; one brother Alfred Ritzler of Pitman; four grandchildren, Ronald Fralick and wife Mindy, Melissa Ritzler, Charles Ritzler IV, and Missy Aulffo; three great grandchildren, Courtney, Haley and Kylie; and many nieces and nephews. He was predeceased by his wife Martha E. (Mazzola); his parents, Charles Ritzler Sr. and Harriet Schiensky; one son Alfred Joseph Ritzler; and one sister Theresa Smith. A Mass of Christian Burial will be held at 11 a.m. on Tuesday in the Parish of All Saints, Buck and Depot Streets, Millville. There will be a viewing on Tuesday from 9 to 10:45 a.m. in the Christy Funeral Home, 11 W. Broad Street, Millville. Burial will be in Holy Cross Cemetery, Millville. The family requests memorial contributions to be made to the Parish of All Saints, St. Vincent DePaul Food Bank, 621 Dock Street, Millville, NJ 08332. Memories and expressions of sympathy for Charles Ritzler Jr. may be shared on the Obituary Tribute Wall at www.Christyfuneralservice.com.

Charles Bernard Ritzler Jr., age 81 of Millville, passed away Thursday morning, August 1, 2013 with his family by his side. Born in New York, he moved to New Jersey as a child and attended St. Mary Magdalen School. Mr. Ritzler... View Obituary & Service Information

The family of Charles Bernard Ritzler Jr. created this Life Tributes page to make it easy to share your memories.