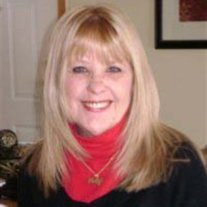 Catherine Theresa Tumelty, age 63 of Millville, passed away Thursday morning, November 28, 2013 at her residence with her daughters by her side. She fought a courageous battle with cancer. Born in Woodbury, Mrs. Tumelty grew up in Deptford and graduated from Deptford High School. For many years, she worked as an Interior Designer, and operated Cathy’s Country Collectibles, and she was an avid candle maker. Mrs. Tumelty was a member of the Parish of All Saints, St. Mary Magdalen and the American Legion Nabb-Leslie, Post No. 82, both of Millville. She enjoyed spending time with her grandchildren, as an active and fun Mommom. Her positive outlook, love of life and sense of humor will be missed by everyone who knew her. Mrs. Tumelty is survived by her daughters, Colleen Mathis and husband Brian of Vineland, and Kathleen Felice and husband Don of Millville; four sisters, Theresa Templeton, Margaret Schwind and husband Walt, Mary Chapman and husband Fred, and Annna Scanlon; five grandchildren, Nicholas, Taylor and Megan Mathis, and Ava and Dominic Felice; and many nieces and nephews. She was predeceased by her parents, James Scanlon Sr. and Theresa (Getler); and one brother James Scanlon Jr. A Mass of Christian Burial will be celebrated at 10 a.m. on Tuesday, December 3, 2013 in the Parish of All Saints, Buck and Depot Streets, Millville. Family and friends will be received from 8:30 to 9:45 a.m. on Tuesday in the Christy Funeral Home, 11 W. Broad Street, Millville. Burial will take place in the New St. Mary’s Cemetery, Bellmawr. In lieu of flowers, the family requests memorial contributions to the Cumberland County SPCA, 1244 N. Delsea Drive, Vineland, NJ 08360. Memories and expressions of sympathy for Catherine Tumelty may be shared on the Obituary Tribute Wall at: www.christyfuneralservice.com.

Catherine Theresa Tumelty, age 63 of Millville, passed away Thursday morning, November 28, 2013 at her residence with her daughters by her side. She fought a courageous battle with cancer. Born in Woodbury, Mrs. Tumelty grew up in... View Obituary & Service Information

The family of Catherine T. Tumelty created this Life Tributes page to make it easy to share your memories.

Send flowers to the Tumelty family.