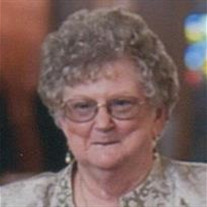 Carol Ann (Riley) Roberts, age 78 of Millville, passed away Tuesday evening, May 3, 2016 at Alaris Health in Cherry Hill. Born in Millville to the late Frank and Emma (Kears) Riley, Carol was a life long resident of Millville. Among her places of employment, Carol worked for Bell Tel of PA in the retiree benefits department, and the Millville School Cafeteria System at Holly Heights School. She was a former member, Sunday School Teacher and Brownie Leader at the former Second United Methodist Church in Millville. She was a past member of the Jaycee-ettes and the Junior Woman's Club. In her youth, and as a young woman, Carol sang in school, churches and local organizations, as well as, weddings. She loved the Lord and her family. She enjoyed oil painting, crafts, singing and cooking. Carol will be sadly missed by her husband of 46 years Ellis; three sons, Rick Marshall and wife Brenda of Millville, Darren Marshall of Chicago, and Allen Roberts and wife Lauren of Delran; one grandson Chris Marshall; nephew Jody Janecki and wife Laura; two nieces, Cheryl Harris and Diane Foltyn and husband Buddy; four grand nieces, Brittany, Brianne, Samantha, and Kiersten; three grand nephews, Zackary, Patrick, and Daniel; and one great-grand niece McKenzee, all of Millville. She was predeceased by one sister Pat Janecki. Funeral services will be conducted at 12 noon on Tuesday, May 10, 2016 in the Christy Funeral Home, 11 W. Broad Street, Millville. Viewings will be Monday from 6 p.m. to 8 p.m. and Tuesday from 11 a.m. to 12 noon in the funeral home. Burial will be in Greenwood Memorial Park, Millville. Memories and expressions of sympathy for Carol Ann Roberts may be shared on the Obituary Tribute Wall at www.christyfuneralservice.com.

Carol Ann (Riley) Roberts, age 78 of Millville, passed away Tuesday evening, May 3, 2016 at Alaris Health in Cherry Hill. Born in Millville to the late Frank and Emma (Kears) Riley, Carol was a life long resident of Millville. Among her... View Obituary & Service Information

The family of Carol Ann Roberts created this Life Tributes page to make it easy to share your memories.

Send flowers to the Roberts family.