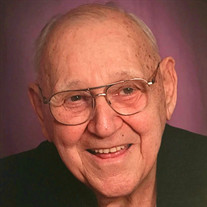 Carl Werner Muhlig, age 93 of Millville, passed away peacefully, surrounded by his loving family, Sunday morning, July 21, 2019 at Genesis Millville Center, after a brief illness. Born in Chemnitz, Germany, to the late Carl and Marie (Klemm) Muhlig, Carl (age six at the time) and his family immigrated to the USA. He graduated from High School in Brooklyn, NY, and then moved to Millville in his early 20's with his family, where he remained. Carl went to work at the old Millville A & P for a short time but then went on to begin a long and successful career of over 40 years with ACME Markets, first working "on the hill" in Millville, and then worked his way up in the company to the level of District Manager, retiring in 1981. Carl absolutely loved traveling to Disney World in Orlando, and enjoyed many years and happy memories there with his family. He was a long standing member of the Hiram T. Dewey Masonic Lodge No. 226 in Egg Harbor City. Carl was also an avid lover of all animals, enjoyed playing Golf, and was even a competitive swimmer in his earlier years. Going to the beach and watching TV shows and movies were also a few of his favorite pastimes. Most of all, however, Carl treasured the time that he was able to spend with his family. Carl will be sadly missed by one daughter Linda Muhlig-Capece of Millville; one son Carl Muhlig and wife Lynn of Millville; brother-in-law Chris Schoppman of Florida; two grandchildren, Chrissie R. Capece and fiancé, Michael Muzarelli of Millville, and Kiel M. Muhlig of Millville; one niece Kyle Schoppman; and his loving Tabby cat Pumpkin. He was predeceased by his loving wife of over 57 years Ruth (Schoppman) Muhlig, who passed away in 2006. A Graveside Service will be conducted on Friday, July 26, 2019 at 11:00 a.m. at the mausoleum in Greenwood Memorial Park, Tenth & Broad Streets, Millville. Arrangements are under the direction of Christy Funeral Home, Millville. Memories and expressions of sympathy for Carl W. Muhlig may be shared on the Obituary Tribute Wall at: www.christyfuneralservice.com.

The family of Carl W. Muhlig created this Life Tributes page to make it easy to share your memories.

Send flowers to the Muhlig family.