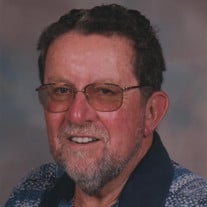 Carl H. Johnson Jr., age 86 of Millville passed away Tuesday morning, May 12, 2015 at his residence after a brief illness. Born in Woodbury to the late Carl H. Johnson and Esther (Eldridge), his family purchased the Millville Daily Republican in 1939, and moved to Millville when Carl was in the fifth grade, where he attended Culver School. Carl graduated from Millville High School in 1946 and Rutgers University in 1950. He then served in the U.S. Army during the Korean War and then went to work for the newspaper where he rose to the position of Business Manager and retired from the Daily Journal. He then moved to Avalon and began his second career as owner and operator of the Avalon Anchorage, retiring in 2012 and moved back to Millville. Carl enjoyed boating, fishing and water activities. He was a member of the First United Methodist Church of Avalon. He was an organizer of the Millville Marlin's YMCA Swim Team. He was active with the Millville Kiwanis Club, American Legion Nabb-Leslie, Post No. 82 of Millville, Vineland Rotary Club where he received a 15 Gallon Blood Donor Award, Cumberland County SPCA, the American Red Cross as a donor, a 50 year member of the Delsea Power Squadron, Past Commander and Past President of the Avalon Chamber of Commerce and a Board Member of the Avalon Home Owner's Association. He especially enjoyed wintering in the Cayman Islands. Carl is survived by his wife of 60 years, Adele (Cunningham); two sons, C. Howard Johnson III and wife Leann, and Charles V. Johnson and wife Lou Ann, all of Millville; one daughter Lorraine D. Bonifield of Millville; two brothers, Edmund C. Johnson and wife Carol of Millville, and Alan C. Johnson and wife Aubrey (Moore) of FL; one sister Lois Bennett of Millville; and six grandchildren, Danielle M. Johnson, Victoria M. Bonifield, E. Nicholas Bonifield, Adele E. Bonifield, Devin Charles Johnson, and Paighton Noel Johnson. A Memorial Service will be conducted at 11 a.m. on Friday, May 15, 2015 in the Christy Funeral Home, 11 W. Broad Street, Millville. Family and friends will be received on Friday from 9 to 11 a.m. in the funeral home. Burial will be private at the convenience of the family. In lieu of flowers, the family requests memorial contributions to the charity of one's choice. Memories and expressions of sympathy for Carl Johnson Jr. may be shared on the Obituary Tribute Wall at www.christyfuneralservice.com.

Carl H. Johnson Jr., age 86 of Millville passed away Tuesday morning, May 12, 2015 at his residence after a brief illness. Born in Woodbury to the late Carl H. Johnson and Esther (Eldridge), his family purchased the Millville Daily Republican... View Obituary & Service Information

The family of Carl H. Johnson Jr. created this Life Tributes page to make it easy to share your memories.