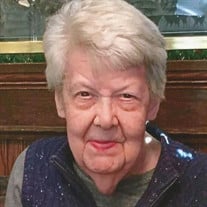 Betty McAlpine, passed away March 2, 2020, at the age of 90 after a period of declining health. She was longtime resident of Millville known for over 13,500 hours of service to the community as a hospital volunteer and for her work as a Friend of the Millville Library. She charmed everyone she met with her British accent, she had a kind, quiet personality, and a sense of humor coupled with a strong spirit and sense of independence. Betty was the only child of Arthur Woodbridge and Dorothy Edith (Frost) Woodbridge and was born in Derby, England on May 31, 1929. She was a widow, predeceased by her husband George Kenneth “Ken” McAlpine, who passed away September 22, 1991 at age 68. Betty received a school scholarship, was an avid reader all of her life and enjoyed sewing. As a teen and young woman, she belonged to a cycling club and frequently cycled into the countryside of Wales. She worked for Ley’s Malleable Castings, a factory in Derby, England for about 10 years, where she was part of an operatic group the company sponsored. Betty took the stage a number of times. She also took vocal lessons singing contralto parts, and participated in vocal competitions and performances of Handel’s Messiah throughout Derbyshire. In 1953 Betty booked passage on the Queen Mary and went to live and work in Toronto Canada, where she worked for Toronto Dominion (TD) Bank and where she met her husband. They married in 1955 and ultimately settled in Millville in 1960. Betty worked at the West Company and then became a US citizen after her husband’s death. Betty was a mentor and girlfriend for 40+ years to Kathryn (Kathi) Saxton-Granato and became a part of Kathi’s family, joining them for special occasions and holidays for more than 25 years. Betty was also blessed with a special friend Tara Emeigh, who helped her in so many ways and who truly cared for Betty and enjoyed her company. She was fortunate to have lasting friendships and caring relationships, many of which grew through her volunteer work. A Celebration of Life gathering will be arranged. In lieu of flowers, memorial donations can be made to the Inspira Foundation-Volunteer Department No One Dies Alone Program or to the Friends of the Millville Library. Arrangements are under the direction of Christy Funeral Home, Millville. Memories and expressions of sympathy for Betty McAlpine may be shared at www.christyfuneralservice.com.

Betty McAlpine, passed away March 2, 2020, at the age of 90 after a period of declining health. She was longtime resident of Millville known for over 13,500 hours of service to the community as a hospital volunteer and for her work as a Friend... View Obituary & Service Information

The family of Betty McAlpine created this Life Tributes page to make it easy to share your memories.

Send flowers to the McAlpine family.