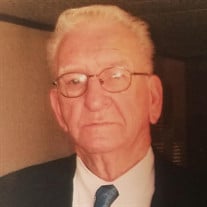 Benjamin "Mr. Ben" Franklin Tevis, Jr., age 89 of Millville, peacefully went home to be with the Lord on Wednesday morning, September 16, 2020 at Cooper University Medical Center in Camden, after a brief illness. Born and raised in Millville to the late Benjamin and Anna Mae (Prince) Tevis, Mr. Ben was a longtime Millville resident. Mr. Ben graduated in the Class of 1948 from Millville High School, where he was the quarterback for the Thunderbolts. In 1950, Mr. Ben went on to proudly serve our country in the U.S. Army during the Korean War from 1951-1952 and completed his service in 1957 at the rank of Sergeant first class. Mr. Ben worked for the State of New Jersey Department of Transportation for over 20 years and then worked 16 years at South Jersey Welding of Vineland, and retired. He married his wife Penelope on May 29, 2010 and they shared over ten years of loving marriage together. When asked how she met Mr. Ben, Penelope says that "He fell out of the sky into my arms." Mr. Ben and Penelope were longtime members of the Millville Church of the Nazarene, where they enjoyed walking into church together every Sunday. He was a member of the Millville Moose Lodge No. 2488, serving as a Prelate. He was also a member of the Fraternal Order of Eagles Aerie 537, and the Millville American Legion Nabb-Leslie Post No. 82. Mr. Ben enjoyed volunteering for several local organizations including Meals on Wheels at High Rise East in Millville for over ten years and also for seven years at Burdette Tomlin Hospital / Cape Regional in Cape May Court House. Mr. Ben will be sadly missed by his loving wife Penelope (Weiss) Tevis of Millville; one son Benjamin Tevis and family; two step-sons; four step-daughters; one sister, Jean Moore; and several loving grandchildren and great-grandchildren. A Funeral Service celebrating Mr. Ben's life will be conducted on Tuesday, September 22, 2020 at 11:00 a.m. in Christy Funeral Home, 11 W. Broad Street, Millville. Family and friends will be received from 10 to 11 a.m. in the funeral home. Burial will be in Greenwood Memorial Park, Millville. Please remember to practice social distancing while in the funeral home and the cemetery. Also, masks are required to be worn in the funeral home at all times. Memorial contributions in loving memory of Mr. Ben may be made to the Millville Church of the Nazarene Building Fund, 2201 East Main St., Millville, NJ 08332. Memories and expressions of sympathy for Benjamin "Mr. Ben" Franklin Tevis, Jr. may be shared on the Obituary Tribute Wall at: www.christyfuneralservice.com.

The family of Benjamin "Mr. Ben" F. Tevis, Jr. created this Life Tributes page to make it easy to share your memories.