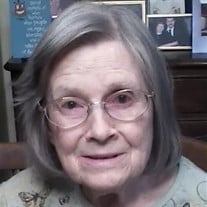 Beatrice "Bea" M. Boyd (McHenry) formerly of Millville died Thursday, Oct. 27, 2016 at Pisgah Manor in Candler, NC. Born 1932 in South Vineland, she was a graduate of Vineland High School. She was predeceased by her husband of 51 years, Richard W. Boyd Jr. who had served in the United States Air Force for 20 years. During those years they lived at over a dozen different bases, including Japan, with some of her favorite memories being from their time in Alaska. They eventually retired in Millville. She was a very gifted pianist and organist throughout her life, playing for her family, numerous weddings and many churches including the Seventh Day Adventist Church of Vineland and Second United Methodist Church of Millville. As a teenager, she was skilled enough to have the ability to play the famous Wanamaker Grand Court Organ in Philadelphia. She was devoted to her family and is survived by one son, Richard W. Boyd, III and his wife Becky of GA, two daughters, Donna L. Dimsha of NC, Diane E. English and her husband Kerry of MD, one brother, Sheppard W. McHenry III and his wife Georgie of NJ, one sister-in-law, Barbara Tomasello of NJ, eight grand children, four great-grandchildren, four nephews, one niece, one great-nephew and one great-niece. She was predeceased by her mother and stepfather, Leona and Clarence May; and her father Sheppard W. McHenry Jr. Services will be conducted at 11 a.m. on Thursday, Nov. 3, 2016 in the Christy Funeral Home, 11 W. Broad Street, Millville, with visitation prior to that at 10 a.m. Burial will be in Mount Pleasant Cemetery, Millville, following the ceremony. As someone who cared deeply for her pets, about animals and took in cats and dogs that needed a home, memorial contributions may be made to Beacon Animal Rescue, 701 Butter Road, Ocean View, NJ 08230. Written tributes may be sent to the christyfuneralservice.com web site.

Beatrice "Bea" M. Boyd (McHenry) formerly of Millville died Thursday, Oct. 27, 2016 at Pisgah Manor in Candler, NC. Born 1932 in South Vineland, she was a graduate of Vineland High School. She was predeceased by her husband of 51 years,... View Obituary & Service Information

The family of Beatrice "Bea" M. Boyd created this Life Tributes page to make it easy to share your memories.

Send flowers to the Boyd family.