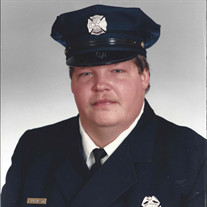 Barry Nelson Lippincott, age 55 of Millville, passed away Thursday morning, May 15, 2014 at his residence after a lengthy illness. Born in Bridgeton, he grew up in Millville, and graduated from Millville High School, class of 1979. For 33 years, Barry worked as a Custodian for the Millville Board of Education and retired in 2010. He was a member of the National Rifle Association, the Cumberland Riflemen, and a 15 year member of the Millville Fire Department. Barry enjoyed hunting, fishing, target shooting, four wheeling, and talking on his ham radio. He was an excellent amateur mechanic. Barry was a devoted caretaker for his parents in the last years of their lives before he became ill in November. Barry is survived by two brothers, Sumner Bruce Lippincott (Terry) of Ocean City, and Michael Charles Lippincott (Beverly) of Millville; four nephews, Sumner Bryan Lippincott (Shannon), Stephen Bryce Lippincott (Tamara), Sean Benjamin Lippincott, and Matthew Christopher Lippincott; one niece Sarah Elizabeth Lippincott; one great niece Sparrow Brighton Lippincott; many cousins; and his dog and faithful companion “Buddy.” He was predeceased by his parents, Sumner N. and Flora E. “Betty” (Wettstein) Lippincott. Funeral services will be conducted at 11 a.m. on Tuesday, May 20, 2014 in the Christy Funeral Home, 11 W. Broad Street, Millville. There will be a viewing on Tuesday from 10 to 11 a.m. in the funeral home. Burial will be in Mt. Pleasant Cemetery, Millville. The family requests memorial contributions to be made in Barry’s name to the Fourth United Methodist Church, 308 Kates Blvd., Millville, NJ 08332, or to the Cumberland County SPCA, 1244 N. Delsea Drive, Vineland, NJ 08360. Memories and expressions of sympathy for Barry Lippincott may be shared on the Obituary Tribute Wall at: www.christyfuneralservice.com.

Barry Nelson Lippincott, age 55 of Millville, passed away Thursday morning, May 15, 2014 at his residence after a lengthy illness. Born in Bridgeton, he grew up in Millville, and graduated from Millville High School, class of 1979.... View Obituary & Service Information

The family of Barry Nelson Lippincott created this Life Tributes page to make it easy to share your memories.

Send flowers to the Lippincott family.