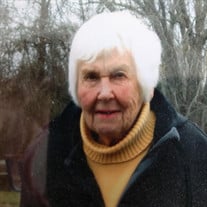 Arlyne Mae Roemer Russell, Lynn, was born on February 25, 1925 in Kennett Square, PA where her mother's family who were early Quaker immigrants had resided for generations. Her mother, Elizabeth S. Harlan married Ernest A. Roemer in New York City in 1920 at the Little Church Around the Corner. In 1929 the family moved from Kennett to Millville, N.J. where her father took advantage of his knowledge in the then new technology of radio and became a partner in (and later owner of) RB Corson Co., a local furniture and appliance store. Her mother, Elizabeth Harlan was a homemaker who at the outset of WW2 was placed in charge of civilian personnel at the Millville Army Airfield, the nation's first National Defense Airport. Lynn also worked at the airfield, where she met such famous WW2 aces as Richard Bong and Pappy Boyington. Lynn was graduated from Millville High School in 1943 and later from Westminster College in New Wilmington, PA in 1947 where she majored in speech and belonged to the sorority Sigma Kappa. It was at Westminster that she met her husband, N. Douglas Russell (Doug), who had resumed his studies there after returning from overseas service as an officer in the U.S. Army. They stood next to each other in chapel. He later claimed that it was her lovely singing voice which first drew his attention to her. After college she taught at Wilson College in Chambersburg, PA. where she also was a radio disc jockey She and Doug were married in 1950 at the First Presbyterian Church on the Maurice River. Initially they lived in Chicago where she found work at one of the first television stations. They eventually settled in Millville, where Doug established a law practice and the couple had three children. The family summered in Avalon, New Jersey where Lynn became a fierce competitor on the 8th street tennis courts. An excellent cook, her dinner parties showcased her talents as a hostess and chef. Lynn lived for sports and enjoyed horseback riding, boating, fishing and, most of all, tennis. However, after seriously injuring a knee playing tennis, she dedicated her full attention to golf. She was a longtime member of both Atlantic City Country Club and Cohanzick Country Club. At the latter she finally attained a personal goal of winning the Women’s Club Championship. Over the years she forged many friendships at Cohanzick and Atlantic City from which she took great pleasure and love through to the very end of her life. In the late 70s she became a pioneer of what is now known as “farm to table” movement. She opened a restaurant at Turtle Cove in Avalon known as the Salad Galley. Each evening, after a hard day's work practicing law, her husband would pick up various types of fresh lettuce and produce from Morris Castellini's farm in Vineland to be composed into victuals for discerning Avalon patrons the next day. Mr. Castellini was one of her husband's clients and surely was bemused by what probably seemed crazy to him. Her brothers, Roberts Mason Roemer and Ernest A. Roemer (Jr.) predeceased her, as did her husband, Doug. She and Doug had three children, Robin Mitchell of Chester, Maryland (husband Paul), Kimberly Fischer (husband Hal) who predeceased her in 2016, and Brock Russell of Millville (wife Mari Paz). Lynn is also survived by six grandchildren; and three great-grandchildren as well as one niece, Rochelle Roemer of Harleysville, Pennsylvania. A memorial service will be held at the First Presbyterian Church, 119 N. Second Street in Millville on Saturday, March 30th at 11 am. In lieu of flowers, the family requests donations be made to Red Oak Hospice, 154 Sunny Slope Drive Bridgeton, NJ 08302. Memories and expressions of sympathy may be shared on the Obituary Tribute Wall at www.christyfuneralhome.com.

The family of Arlyne Mae Russell created this Life Tributes page to make it easy to share your memories.

Send flowers to the Russell family.