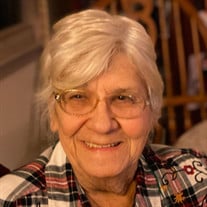 Antoinette Rita DeFelice (DeTetta), age 88 of Millville, affectionately known as "Jeanette," passed away early Saturday morning, October 24, 2020. She was born on April 18, 1932 to the late Daniel DeTetta, Sr. and Lucy (Cuttone) in Philadelphia, PA. She was raised in Philadelphia, where she attended Vare Junior High School before meeting the love of her life, Michael and getting married in 1948. Antoinette was a wonderful, dedicated mother to her 4 children. She moved to the Millville/Vineland area in 1973 to start a new chapter and continue raising her family. Her main “job” was homemaker, but she also stepped into the business world as owner and operator of a flower shop and a produce market. She was very creative and loved working with flowers and making lots of beautiful arrangements and crafts over the years. She made everything better with her special talented touch! Antoinette is definitely considered a “veteran of life” due to the many trials and tribulations that she endured over the years including losing two children and her husband within a short period of time. She was known to be a very strong and independent woman which earned her the title “Bad-Ass Woman”! Antoinette is survived by her son Michael DeFelice and partner Robert Capps; her daughter Linda Fricano; six grandchildren, Craig, Eric, Danielle, Megan, Dana, and Danae; seven great grandchildren; her brother Daniel DeTetta, Jr.; and many nieces, nephews, and cousins. She was predeceased by her husband, Michael DeFelice; her sons, Garry and Craig; her brother Domenick DeTetta; her infant sister named Rose; and her sister in law Theresa DeTetta. A Funeral Service will be conducted at 11:00 a.m. on Thursday, October 29, 2020 in the Christy Funeral Home, 11 W. Broad Street, Millville. Friends and family will be received in the funeral home from 6 to 8 p.m. on Wednesday, and from 10 to 11 a.m. on Thursday. Cemetery services will follow at Greenwood Memorial Park, 1001 East Broad Street, Millville. Please remember to practice social distancing while in the funeral home and the cemetery. Also, masks are required to be worn in the funeral home at all times. Flowers, donations, and condolences may be directed to the Christy Funeral Home or directly to the family. Memories and expressions of sympathy for Antoinette Rita DeFelice may be shared on the Obituary Tribute Wall at: www.christyfuneralservice.com.

The family of Antoinette R. DeFelice created this Life Tributes page to make it easy to share your memories.

Send flowers to the DeFelice family.