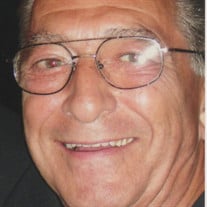 Anthony Vastardis, age 79 of Millville passed away Monday morning, July 20, 2015 at Inspira Medical Center, Vineland after battling a long illness. In 2012 Anthony was diagnosed with PSP (Progressive Sub-Nuclear Palsy) which is an Atypical Parkinson's Disease that affects the eyes, mouth and throat along with all movement of the body. He passed away from pneumonia due to complications of this disease. He was born in NYC, and raised there and in Philadelphia, PA. He managed many restaurants in NYC, Philadelphia, FL, and NJ. He was an entrepreneur all his life. He spent 20 years working for National Fisheries in Florida where he was the first salesman to sell seafood to the cruise ship industry. Mr. Vastardis moved to Millville in the 1990's where he and his brothers were involved with several Real Estate properties and restaurants. His last business venture, Anthony's Hot Dog World was established May of 2010 in Bridgeton, NJ. Anthony was a very intelligent man who enjoyed traveling, dining out, playing cards, and spending time with his family. He was a loving husband, devoted father and grandfather and a generous friend. He had attended St. Anthony's Greek Orthodox Church in Vineland. Mr. Vastardis is survived by his wife Sandy (Spizzica) Vastardis; two daughters, Maria Cardillo of Ashburnham, MA, and Terri Ann Apostolakos of West Grove, PA; one step son Peter D. Kelly of York, PA; one stepdaughter Megan E. Kelly of Mays Landing; two brothers, Kostandinos (Gus)Vastardis and his wife Helen of Millville, and Dimitrius (Jimmy) Vastardis of CO.; his in-laws, Peter and Martha Spizzica of Millville; 13 grandchildren; and one great granddaughter. He was predeceased by his parents, John and Mary (Lambrose) Vastardis; one son John; and one daughter Stephanie. There will be a viewing on Thursday evening July 23, 2015 from 7 to 9 p.m. and Friday morning from 9 to 10 a.m. at the Christy Funeral Home, 11 W. Broad St., Millville. A funeral service will begin at 10 a.m. on Friday, July 24, 2015 in the funeral home. Burial will follow in Greenwood Memorial Park, 10th and Broad Streets in Millville. The family requests memorial contributions to be made to: www.CurePSP.org. All donations will fund research for the cure of this terrible disease. Memories and expressions of sympathy for Anthony Vastardis may be shared on the Obituary Tribute Wall at www.christyfuneralservice.com.

The family of Anthony Vastardis created this Life Tributes page to make it easy to share your memories.

Send flowers to the Vastardis family.