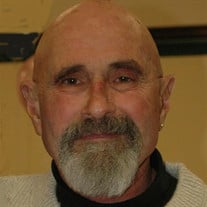 Anthony W. Ficcaglia, age 71, died peacefully at his home in Port Elizabeth, NJ, on Thursday morning, March 19, 2015, surrounded by his loving family, after a lengthy illness. A beloved husband, father, and grandfather, he is deeply mourned by his wife of 46 years, Leslie (Pastor); his son, Jeremy, of Millville; and his daughter, Linnet, of Vineland; his grandchildren, Jilliane Sara Ficcaglia, Anthony Michael Ficcaglia, and especially Rosalena Maria Ficcaglia, who was like a second daughter to him. He was predeceased by his brother, Robert, in 1942. Tony was born in Vineland, the son of Anthony Joseph and Lena (Sammartino) Ficcaglia, and graduated as salutatorian of the Vineland High School class of 1961. A National Merit Scholarship winner, he was accepted at Harvard, Princeton, Annapolis and West Point, and chose to attend the University of Pennsylvania on a full scholarship. There he majored in psychology, graduating in 1965, and pursued his studies with a Master’s degree in the same area at Temple University. He worked in that field at Holmsburg Prison, at The Training School at Vineland, and for the major portion of his career as a school psychologist in the City of Vineland, retiring in 2002. Active in his county and in his community, among his involvements Tony was the president of the local school board for ten years. He served with dedication for over twenty years as a member and then chairman of the Maurice River Township Zoning Board. He held a Black Belt in Goju Ryu karate and also practiced Aikido and Tai Chi, disciplines in which he both studied and taught. Tony was a true Renaissance man. In high school and in college he played gigs with a small group of fellow musicians, usually piano or bass although he was also proficient on recorder and guitar. He was widely read and was especially fascinated by history and politics. At his home on Minnamuska Creek Farm he maintained an active lifestyle, growing and harvesting wood products and at various times raising sheep, goats, and chickens, as well as keeping horses for his children. Another important facet was a huge organic garden that he and his wife maintained each summer; the freezer was always full of food grown onsite. He kept several vintage tractors running and was able to fix anything that was broken on the farm and in the house. In addition Tony was a creative vintner, producing both red wines such as Sangiovese as well as some notable whites. A dedicated environmentalist, Tony also assisted in obtaining recognition of our river systems as Wild and Scenic; studied birds, botany, and animals; and was engaged in a longitudinal analysis of the threatened Sensitive Joint Vetch in the upper reaches of the Manumuskin River. For many years he also conducted water sampling on the Manumuskin for the Delaware Riverkeeper and Citizens United to Protect the Maurice River and its Tributaries. Additionally, under the auspices of NJ Conserve Wildlife he was an observer for a local eagles’ nest, monitored spring frog populations, and acted as a shorebird steward during the horseshoe crab spawning season. An avid hunter, he also enjoyed clamming in nearby bays, boating on the Maurice River, and sailing on Union Lake. When they could spare time from their farm, river, family and friends, he and his wife liked to travel to the South of France to enjoy the culinary and scenic delights of that area. A memorial service will begin at 2 p.m. on Monday, March 23, 2015 in the Christy Funeral Home, 11 W. Broad Street, Millville. Family and friends will be received on Monday from 12:30 to 2 p.m. in the funeral home. Burial in Sacred Heart Cemetery, Vineland will be at a later date at the convenience of the family. The family requests memorial contributions to Citizens United to Protect the Maurice River and its Tributaries, PO Box 474, Millville, NJ 08332. Memories and expressions of sympathy for Anthony Ficcaglia may be shared on the Obituary Tribute Wall at: www.christyfuneralservice.com.

Anthony W. Ficcaglia, age 71, died peacefully at his home in Port Elizabeth, NJ, on Thursday morning, March 19, 2015, surrounded by his loving family, after a lengthy illness. A beloved husband, father, and grandfather, he is deeply mourned... View Obituary & Service Information

The family of Anthony W. Ficcaglia created this Life Tributes page to make it easy to share your memories.

Anthony W. Ficcaglia, age 71, died peacefully at his home in...

Send flowers to the Ficcaglia family.