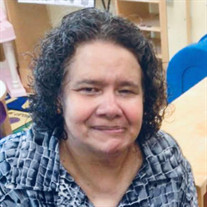 Ana Velazquez-Tirado, age 59 of Millville, passed away unexpectedly Wednesday morning, October 23, 2019 at Bishop McCarthy Center in Vineland. Born in Ponce, Puerto Rico to José M. Velazquez and the late Rosa Maria Rodriguez, she moved to Brooklyn, NY with her family when she was 10 years old. Ana graduated from Franklin K. Lane High School, and continued her education by receiving her Associate's Degree in Business Administration. For 15 years, Ana worked for Social Security as a Service Representative, before moving to Millville with her family. For several years, she worked for Millville Day Care Center. She then worked at St. Mary's School in many different departments, starting as an Aide in Pre-K, and retiring as the Cafeteria Manager. She was a member of the Parish of All Saints in Millville. Ana loved going to the beach, watching Christmas movies, gardening, and doing crafts, but most of all she enjoyed spending time with her family, especially her grandchildren. She and her husband Angel recently celebrated their 41st wedding anniversary on October 8, 2019. Ana will be sadly missed by her husband Angel Tirado of Millville; daughters, Roseann Tirado, and Angela Losaw and husband Chad, all of Millville; her siblings, Francisco Vivas, Luis Cruz, José Velazquez, Emma Velazquez, and Rose Chiavelli; three grandchildren, Nicole Tinsley, Logan Wentz, and Annalee Losaw; and many nieces and nephews. She was predeceased by four siblings, Cheo Vivas, Eduardo Vivas, Ramon Vivas, and José Velazquez Jr. Funeral services will be conducted at 10 a.m. on Tuesday, October 29, 2019 in the Christy Funeral Home, 11 W. Broad Street, Millville. Family and friends will be received on Tuesday from 8:30 a.m. to 10 a.m. in the funeral home. Burial will be in Mt. Pleasant Cemetery, Millville. The family requests memorial contributions to St. Jude Children's Research Hospital, 501 St. Jude Place, Memphis, TN 38105.

The family of Ana Velazquez-Tirado created this Life Tributes page to make it easy to share your memories.

Send flowers to the Velazquez-Tirado family.