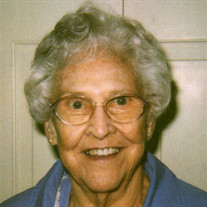 Alice S. (Schultz) Jeffries, passed away on Tuesday, May 13, 2014 in Miami, FL., after suffering from dementia over the past six years. Mrs. Jeffries was born in the family home on N. 4th Street in Millville on August 27, 1924 to Myrtle (Mason) and Frank Schultz. She attended grade school, and graduated from Millville High School, class of 1942. After graduation, she worked as an operator for N.J. Bell Co. for the duration of the war. She soon met R. Gordon Jeffries when he came home from the war, and they were married in January 1946. In 1951, she moved to Miami to raise her family. In 1984, Mrs. Jeffries lost Gordon to emphysema, and in 1993, her cousin Geraldine died, leaving the home on N. 4th Street in Millville to her. That same year, she returned to Millville, and became a member of the Cumberland County Community Church with her stepdaughter Marcia, where they formed a wonderful relationship with the church family. In 2008, she moved back to Miami, and spent the remainder of her years in a great retirement village that she loved. Mrs. Jeffries was preceded in death by her husband Gordon; her parents; two brothers, Elwood and William Schultz; her step daughter Marcia; one son Keith; and her grandson Robert G. Jeffries III. She is survived by one son Robert G. Jeffries Jr. and wife Vicki; two granddaughters, Ali and Brittany; three great grandsons, Robbie, Damian and Dominic; and many nieces and nephews. Funeral services will be conducted at 11 a.m. on Thursday, May 22, 2014 in the Christy Funeral Home, 11 W. Broad Street, Millville. There will be a viewing on Thursday from 9:30 to 11 a.m. in the funeral home. Burial will be in Mt. Pleasant Cemetery, Millville. In lieu of flowers, the family requests memorial contributions in Alice’s name to the Millville Army Air Field Museum, 1 Leddon St., Millville, NJ 08332, or to the Alzheimer’s Association, 399 Market St., Suite 102, Philadelphia, PA 19106. Memories and expressions of sympathy for Alice Jeffries may be shared on the Obituary Tribute Wall at: www.christyfuneralservice.com.

Alice S. (Schultz) Jeffries, passed away on Tuesday, May 13, 2014 in Miami, FL., after suffering from dementia over the past six years. Mrs. Jeffries was born in the family home on N. 4th Street in Millville on August 27, 1924 to Myrtle... View Obituary & Service Information

The family of Alice S. Jeffries created this Life Tributes page to make it easy to share your memories.

Send flowers to the Jeffries family.